April 10, 2013
Can we all take a moment to clear the air about a topic near and dear to my heart?  Seriously, no bullsh*tting, people, this is a safe and honest place:

I hate bubbles.  We have accumulated a stockpile of cheap, birthday party take aways, that mask themselves as bubbles.  They are composed of one part soap and ninety-nine parts water.  In the history of mankind, no one has ever successfully blown two consecutive bubbles from a single wand dip.  I dare you to prove me wrong.

It triggers frustration for the Yoys.  Little E always concedes and takes to drinking the bubble mixture.  I'm not even a little bit concerned about that, as I know what is labeled as bubbles is really just dirty water.

The Yoy arms are quickly covered in a sticky film which then attracts every speck of dirt within a three mile radius.  Thus, transforming my kids into dirty street peddlers, with the exception of their crisp polo shirts.

Bubbles done right is amazing.  I can set up camp in our driveway.  Pop open a soda, settle into a tailgating chair and blow bubbles while my kids chase them around for hours.  It never gets old.  Ever.  And it is a wonderful way to kill an hour during the dreaded 4-6 time slot.

Today I decided to take charge of the deteriorating bubble situation.

I marched into Babies R Us, and purchased top of the line bubbles.  One for Big E and one for Little E, as forced sharing unhinges the shaky peace treaty the Yoys are operating under at any given moment.

The price tag for my high-end bubbles: $3+ per little bottle.  For the same price, I could buy some Trader Joe's wine and be a much nicer Mrs. Yoy.

I pulled out the bubbles when we arrived home from school.  The Yoys were amped!  The weather was great!  We were going to have an awesome afternoon.

Until Little E clumsily spilled half of his bottle.  I watched in horror as the good bubbles slowly swirled together with the yellow film on our driveway and headed down hill.

I was frustrated, but an accident is an accident.  Big E was so engrossed by the flowing bubbles that he dumped the rest of Little E's bottle out.

Now I was mad.  And Little E was crying.

I somehow negotiated opening Big E's bottle and pouring some into Little E's.

Within five minutes,  every ounce of top shelf bubbles was spilled.

The brief time I spent with the money bubbles did not disappoint.  So, so many bubbles.  And different shapes.

Now both boys were crying for more bubbles.  I was crying because I had just watched my $7 swirl it's way down my driveway.

Our cleaning people were fortunate enough to witness Big E's grand bubble finale.  As they loaded up their car, they watched as Big E lost his f*cking mind over soapy water.

His screams echoed through our neighborhood.  You'd think he was calling after a pet that had been hit by a car or something equally as tragic.

It was pathetic and in that time, I pledged that our house would forever be known as a bubble free zone. 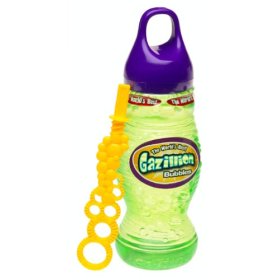