Eight is a crowd

May 12, 2011
When Big E takes a nap or goes down for the night he brings with him six stuffed animals: duck, other duck, other other duck, Elmo, sheep, and bear.  If one of these animals goes missing it is armageddon.  He will not lay down until all six of the animals are present.

It started with bear.  And then he added sheep.  And all of the sudden he had this whole stuffed animal army keeping him company in his crib.  This means if he spends the night out (i.e. at Grandma's or Uncle Yoy's) then all of the animals must come, too.  I practically need a whole other suitcase to pack his animals.

Yesterday, he was digging around in his toy bin and found a stuffed giraffe that plays a lullaby.  Giraffe and Big E were instant best friends.  Big E brought him to eat dinner at the kitchen table.  He put Giraffe on his little truck and drove him around the family room.

I knew what was coming next.

I went to tuck him for the night and he requested Giraffe.  I told Big E no.  Giraffe was not for crib time.  Seven stuffed animals plus Big E is way too much stuff in the crib.  He didn't fight me on it, at least not this time...

If I don't put my foot down, Big E will turn his crib into one of those crane machines. 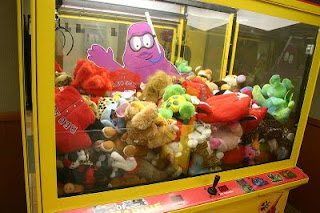