It's the end of the world as we know it - REM

I took this looming event to reflect and carefully choose what I wanted to do during my last Saturday here on Earth.

Naturally, the Yoys ended up at Chuckie Cheese.  Both Mr. Yoy and I were big fans of the place dating back to when we were children.  Which,  is also the last time we had been there.  Also, they advertise on Georgia Public TV consistently, so Big E talks about Chuckie like he is his long, lost friend.

After spending the evening hours there, I can honestly say that I did experience rapture.  I'm pretty sure going to Chuckie Cheese on a Saturday night is synonymous with the end of the world.

It was dirty, chaotic, and crowded.  Big E loved it, of course.  We gravitated to the skeeball machines where we did our best to win tickets to redeem an awesome prize. 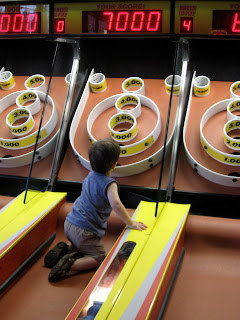 After pooling our winnings with the Neighbor Yoys (yes we dragged them into our mad world) we had enough tickets to win a pencil cap eraser, which I'm pretty sure costs less than the $20 worth of tokens we spent winning it.  Unfortunately, the line to redeem tickets was so long we gave them to a boy celebrating his birthday.

We evacuated the premises as fast as we could and went somewhere a little more manageable - FROZEN YOGURT!
Chuckie Cheese