Big E Life Lesson #18: Only strippers take their clothes off in public

July 14, 2011
After our "killer" Costco run,  Aunt Yoy and I were feeling fearless, not to mention hungry.  We decided to take all three baby Yoys to Jason's Deli for lunch.

First of all, arriving at 12:30 was a rookie mistake and we should have known better.  The place is like a table maze and we've got two strollers,  not to mention people are packed in there like sardines.  We found two tables pushed together towards the edge of the maze and grabbed them.

I made my way across the restaurant, stacked three highchairs, and attempted to roll them to our table.  I got about 60% of the way back to our spot and then the table maze defeated me.  I had to carry the highchairs, one-by-one, above customer's heads to reach our table.  Good thing I'm tall and have freakishly long arms.

Then we had a flurry of cleaning, wiping, placemating, bibbing, and feeding before Aunt Yoy and I could finally get up one at a time and order our lunch.  When all was said and done, both of us were sweating.

We discussed how we were quite the scene and definite birth control for anyone within earshot.

The meal went off without a hitch and it seemed we had survived.

Then Big E decided to take it off!  His shirt, that is.  He had such a big, proud smile on his face.  We tried to reason with him, another rookie mistake.

Aunt Yoy:  Big E - do you see anyone else without a shirt on?

Mrs Yoy:  Big E - ONLY STRIPPERS TAKE THEIR CLOTHES OFF IN PUBLIC, NOW PUT IT BACK ON!

The young lady at the table next to us asked him to flex his muscles.

Um, yeah, you're not helping.

A group of young guys on the other side of our table sat there laughing at him.

We tried not to laugh, too, but it was really funny.  And also weird.

At least he left his pants on. 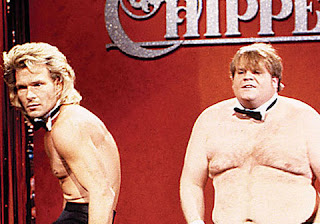