Clip It! Clip It Good!

July 28, 2011
Baby nail clippers.  My arch nemesis.  For those of you that have never attempted to cut a baby's fingernails you may not appreciate this blog entry, but I dare you to read on.

There are many reasons why Little E's nail clipping sessions are my absolute least favorite baby hygiene task.  I will go on record saying I'd rather change hourly poo diapers for an entire day than sit down and clip this kid's nails.

First of all, the baby clippers are a smaller version of my nail clippers.  I have pretty large hands and I find myself awkwardly trying to use them.

Second, Little E's nails are tiny.  And he is always in motion.  I have thought about a nail clipping ambush while he is sleeping, but I don't want to risk waking him.

Third, I'm kind of blind.  This is self-explanatory.

Fourth, this is a very sensitive part of Little E's body.  Cut down too low, not like I have any control, and he just about bleeds out.  Don't cut enough and he wakes up the next morning like he had an overnight visit from Freddy Krueger.

Fifth, for whatever reason, baby nails grow at an incredible rate.  Grown women would be jealous.  Little E's nails need to be clipped about every five days.  If I ignore the inevitable, which I admit I have done once or twice, it's a scratch-fest on his face and other parts of his body.

Little E is old enough now to understand what is about to go down when I pull out the clippers.  He goes insane.  This makes the process next to impossible.  I know that it gets better.  Big E sits pretty still when I cut his nails and sometimes he'll even ask me to do.

I've heard other mommies suggest nail filing or biting the nails off themselves, but I have tried neither.

Sometimes I feel like putting his socks on his hands, since they don't fit on his feet anyway, and calling it a day. 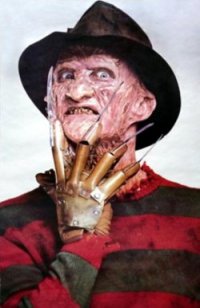