July 06, 2011
The Yoys spent Fourth of July weekend up in NY celebrating my brother's wedding.  We had such an amazing time.  We were very honored that my brother and sister-in-law asked if Big E would be a ring bearer in their wedding.

The weekend began with a bang, literally.  Big E tripped in the hotel lobby within an hour of us checking in.  I didn't see it happen and he didn't make too much of a fuss.  Mr. Yoy called me from our room moments later and told me to come ASAP.  I rushed to the room and found what appeared to be a murder scene.  What Big E was calling "paint" was blood and it was everywhere.  On the rental crib, duvet cover, his clothes.  It was all over his hands and face and I couldn't tell where it was coming from.  Good thing one of Mr. Yoy's best friends, Dr. Yoy, was there to inspect Big E, clean his wound, and make things "all better."

The stigmata, as Mr. Yoy referred to Big E's hand wound, would end up being a central theme to the weekend.  This kid falls a lot.  He reopened his hand about six times.  We went through thirty bandaids, at least.  He bled on multiple people who were just trying to help him up.  I was mortified.

I know what you are thinking.  Big deal, the kid has a cut.  Any other weekend, I wouldn't have been such a nervous wreck, but I was envisioning things to come.  Like say, I don't know, the wedding that he was in.  I was so worried he'd get blood on Aunt Yoy's beautiful wedding dress.  He reopened his hand two minutes before pictures started and we had to wait on a cleanup and bandaid.

We escaped pictures blood-free.  Now it was on to the wedding.

I have been mentally rehearsing with Big E his walk down the aisle.  What I didn't realize, was that his walk would include eight giant stone steps down to the ceremony.  We practiced with him as much as possible during picture time, but he can barely walk down normal steps.  Thank goodness there was a hand rail and I pleaded with him to use it.

Mr. Yoy and I made it down the steps and lined up in our respective spots.  I could see at the back of the processional line, Big E and the other ring bearer hurling the hand sewn ring bearer pillows in the air and twirling them around.  They were laughing and having a ball.  This did not bode well for Big E's performance.  I prayed he made it down the aisle without an incident.  Today, Big E's motto was "Expect the worst, hope for the best."

I'm happy to report that he took awhile, but he made it down the steps and to his seat in the front row.  I don't think I breathed the entire time.  He sat quietly with my folks for about 1.8 seconds and then he started throwing his pillow and saying "my pillow fall" over and over again.  I shot him death looks, but he ignored them.  I was embarrassed.  I mouthed to my brother, "I'm sorry."  He laughed.  My cousin saw this from the second row and quietly escorted Big E up to the top of the hill where he could continue his pillow games without interrupting the ceremony further.

Another cousin had Little E who was busy chewing on things and winning best behaved baby.  Right before the vows began, he amped up the volume and she also escorted Little E up to the hill.

After the ceremony, I looked around to see that my kids were 0-2.  But that's ok.

The rest of the evening was great and Big E danced until the band cut off at 10:30.  He had an absolute blast and talks about it every day.

Congratulations to my brother and new sister-in-law! 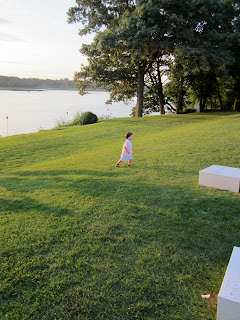