I drove all night...

December 26, 2011
Yesterday was quite possibly the longest day of my life. It's been a good 18 hours since we made it home, so I feel like I can finally talk about it.

I awoke at 8:30 at the Hard Rock in Ft. Lauderdale.  The Yoys were with my parents and I was able to sleep in for the first time since March.  It's not that I keep a calendar of days I sleep past 7:30, but March was the last time I escaped my children, I mean vacationed.

Mr. Yoy and I jumped in the car and drove up to Gardens to retrieve our kids, load up the big red bus, and hit the road for Orlando.  I was under the assumption we were staying the night in Orlando with Mr. Yoy's folks, but you know what they say about assuming things.

Five minutes after we leave my parents, Big E is out cold. He sleeps the majority of the way to Orlando.  This is great as I was not in the mood to spend the next three hours playing I spy or some psychotic toddler version of it.

We were not so lucky with Little E.

Not only did he not let the lull of the highway take him away to sleepyville, he maintained a constant whine for the first hour or so.  I caved and asked Mr. Yoy to make Little E a giant snack cup of goodies to quiet him.  This worked for about 45 minutes until he was done snacking. He then ramped back up the whining/crying.  I contemplated driving into the swamp at Yeehaw Junction.

Around this time Mr. Yoy lets me in on his little plan.  He does not want to spend all day Monday in the car with Little E.  He is not a good traveler.  This has been proven on every trip we've ever taken.

The only time Little E isn't whining is when he is sleeping. The only time he is ever sleeping, is when we drive at night.

I know what's coming next.

We are going to be driving all night.  We are famous for doing this.

As we unload the Yoys in Orlando, Mr. Yoy drops the bomb on his folks.  They are disappointed, but understand that an extended drive with a crying baby is hell on earth.

After a delicious Chinese dinner, Yoy baths, and a menorah lighting, we hit the road, AGAIN.  The clock reads 8:10.  I do the math.  Even if we hit zero traffic and maintain 77 mph and don't stop for gas, the earliest we roll into the ATL is 2:30.

We definitely will need to stop for gas at some point, so realistically we are looking at 3am.  We are nuts.  But we are also desperate parents and it makes you do the unimaginable.

I try to doze off early on as I know Mr. Yoy will need me most at the end when we become delirious.

I fall asleep as we cross the state line and when I awake about 30 minutes later we are in a very dense fog. Awesome.  Not only are we driving late at night, but now we are driving in quarter of a mile visibilities.  I quickly check my Weather Channel App.

Heavy Fog Advisory for Georgia.  Sweet.  I wished I would have checked that BEFORE we left.

Mr. Yoy is concentrating so hard I swear I see steam coming from his ears.  Or maybe that is just more fog.  I am concentrating too, even though I'm not even driving. We try to figure out how to work the fog lights.  So this is what they're for!

Well now I'm awake because I'm so worried we are going to come over a hill and barrel into a thirty car pile up like I've seen on the news.  Note to self: stop watching so much news.

Finally the fog thins out and I start to doze off again.

Both Yoys are in and out of sleep.  Little E has brief random fits of crying, but for the most part everyone is quiet.

We pull up to our house a little after 3am.  We are FINALLY home.  We minimally unload the car and have pretty seamless crib transitions, thank goodness.

Mr. Yoy puts on a cheesy lifetime movie for us to fall asleep to.

We deliriously laugh about driving 700 miles with our kids and drift into sleep.

This drive was made possible by the following:
Gallons of Coke Zero
Sunflower Seeds
Mike and Ikes
Peanut Butter Pretzels
Spotify
Humor
Love 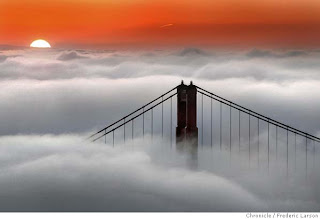 I'm not sure how the Golden Gate bridge ended up in South Georgia, but this is what it looked like.
fog minivan road trip