The Yoy version of Elf on the Shelf

December 02, 2011
The Elf on the Shelf is a fabulous idea.  I wish I would have thought of it.  It is blatant bribery, which I totally support.

The problem for us, is that the elf doesn't really tie into Hanukkah.

So how can we, the Yoys, play mind games with Big E for the entire month of December?

Mr. Yoy took Big E to the toy store on Sunday and let him pick out his Hanukkah present.  They returned home with a giant GeoTrax train table.  We brought it in the house and it has been residing on the floor in the dining room since.

Everyday Big E asks to open it.  Everyday we tell Big E he has to be on his best, best behavior and he can have it. Everyday Big E is a total train wreck (pun intended) and the sun sets with the table still in the box.

Mr. Yoy and I were talking about it and we decided THIS was our Elf on the Shelf.  Except we are going to call it the Train Table on the Counter, mostly because this table isn't going to fit on any shelf in this house.

So far I've only seen a mild uptick in the quality of Big E's behavior and listening skills.

Does this Elf thing actually work?

Um, just because you say it on repeat throughout the day doesn't make it true.

Anyway, I'll keep you posted on how the train table idea is working for us. 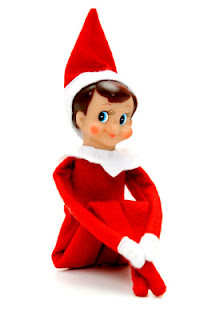 This is the first time I've actually seen a picture of the elf and I have to admit, this guy is a tad creepy.
behavior Big E Elf on the Shelf