Just how dirty are you?

December 11, 2011
Before you get all judgy-judgy on me, I would like to say that I pretty much solo parented this whole weekend. We did have a babysitter last night to watch the Yoys while we attended a swank Buckhead holiday party and a boxing match.  Weird combo, I know, but that's how us Yoys roll.

I bathed my kids on Friday evening before we went to Tot Shabbat (or as Mr. Yoy called it this week, Tater-tot Shabbat).

Saturday we stayed around the house and I pretty much lost my damn mind.  By the time our sitter arrived to relieve me of parenting for the day, I had zero left in the tank.  Plus, I had run out of caffeine beverages, so I was a mother on the edge.

This led to the decision not to give the Yoys a bath last night.  I didn't feel too bad about it, as it's not like it is 80 degrees outside and they smell.  Plus, they are both suffering from dry skin, so skipping a bath is probably good for their skin.  At least this is how I justified my decision at the time.

This afternoon I took the Yoys over to the Dwood Yoys to visit.  We then had an early dinner and headed home for baths and an uneventful bedtime.

About halfway home, I noticed Big E had become uncharacteristically silent.  Before I even switched on the overhead light, I knew I'd find him slumped over in his car seat and he was.

We got home and I first unloaded Little E.

Then I literally sat in the garage watching Big E for five minutes while I internally fought with myself about whether I should wake him and bathe him, or just throw him in his crib.

He is getting borderline nasty.

But he is so quiet and peaceful now.

And those three glasses of wine last night may still be affecting your judgement.

Either way, he had to come out of the car seat, so I went in to get him.  He remained slumped against me as I carried him upstairs.  It was decision time.

I thought back to an episode of Oprah that was all about bad mom confessions.  One lady admitted to not bathing her twins for two weeks once, because she was too tired.

I smiled.  If that lady can admit that I national television, I can put Big E to bed without a bath.  I promise to pressure wash him tomorrow.  I pulled off his skinny jeans and put him in the crib.  He was out.

Now, Little E was a different story.  I had found crumbs of a corn muffin he ate yesterday in his diaper today. This kid was definitely getting a bath!

So, I've got one super clean Yoy and one dirty Yoy, which for me averages out.  And if there is anything I pride myself on, it's being average. 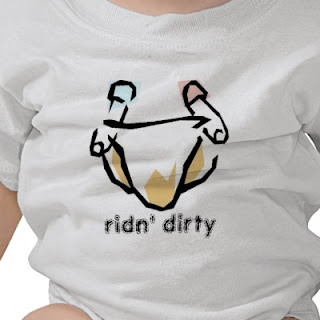 Big E will be wearing this to school tomorrow as a fair warning to all those that encounter him.
bath time bedtime Big E hygiene irresponsible parenting