December 15, 2011
These would be the children of the Stepford Wives.

I encountered a gaggle of them at the botanical gardens today.

We met some friends there to peruse the train exhibit.  The kids were enthralled by the trains.  They were laughing and running alongside the trains.  It was unseasonably warm.  It was awesome.

My friend and I chatted about the merits of public versus private school and if public school hurt your chances getting into Harvard, for example.  I'm not saying my kids are going to Harvard, I'm just saying they are applying.

I paused mid-thought as a trio of beautiful little blond children entered the train exhibit.  They were wearing matching dresses in different colors with coordinating bows as big as their heads.

Why don't my kids ever look that nice?  I mean, I know I have boys so I should automatically deduct points for dirt, but even when Big E was a ring bearer in my brother's wedding, he didn't look this good. And these kids were just out at the dang gardens.

Following the girls was a little boy about five years old. He was wearing a white button down.

What in the world?  Who would dress their little boy in a white button down to go play in the dirt?

I glanced over at my disheveled kids in their t-shirts and jeans.  Little E was picking his nose.  Am I failing as a mother?

My friend and I commented about how put together these kids were.  It was almost shocking.

Then we saw their mom.

She was wearing a crisp pink button down, matching pink slacks, and a black cardigan tied over her shoulders.

We gave each other knowing looks.  We were experiencing an up close encounter with WASPs.  This was a very special treat for us, as we are usually knee deep in JAPs.

The perfect children watched the trains and immediately followed their perfect mom when she said it was time to move on.

I wanted to run after her and ask what her secret was.

Do you taser them?

But, as usual, I chickened out.

Now excuse me while I go and iron all of my button downs that have been collecting dust in the back of my closet. 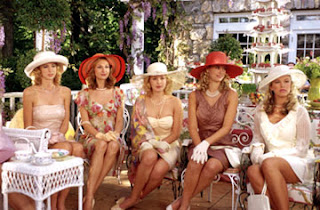 Not my usual crowd, but I would probably do well with my inappropriate comments and leggings.
behavior botanical gardens