January 06, 2012
Always on the lookout for a sale, I located a rack of sleepers at Babiesrus for $6.99.  It's like they were practically GIVING them away.

For those of you that have never been in the market for baby pajamas, you will be disgusted to hear that such stores as Gymboree has the balls to sell them for $20 and up.

Out of principle, I refuse to purchase pajamas there.  I think it is highway robbery.

So there I am, face to face with a giant rack of sale jammies.  My heart rate began accelerating.  I've hit the mother lode.

Big E is pretty set on jammies.  Little E is a different story.  The fleece sleepers that were handed down from Big E haven't been working for Little E.  They make his skin break out, shocking, I know.

I'm always on the hunt for a fuller fitting jammie.  Most of them are cut "skinny", which is discriminating to the larger boned toddlers, like Little E.

Oooooh, look at these cute dinosaur themed pajamas! They even say ENORMOSAURUS on the front, perfect for Little E.

I pulled them off the rack.  JACKPOT!  They weren't slim fitting, they were perfect.  To be on the safe side, I bought him a 2T.  He is currently 17 months and not tall.  At. All.

Tonight, as I was sliding on Little E's new pajamas, I rejoiced at how easy they slid over his fat arms.

We moved to the legs.  Well, these were definitely long enough.  Not that I was worried.

As I zipped up the leg I hit a major speed bump, or as it is anatomically known, his thigh.

While the new jammies were fuller cut, they were not stretchy, and stretchy is key.  I tried to move the zipper over Little E's fat rolls, but I was worried I'd catch some skin.

As I pulled the two sides of the fabric together, I conceded the battle.  Even if I WERE able to zip this thing up, Little E would probably lose blood circulation to his leg in about seven minutes.

Ugh.  I give up.  Seven dollars is not worth it.  I stripped him down and started over.

The irony was not lost on me.

My kid can't fit into the ENORMOSAURUS jammies. 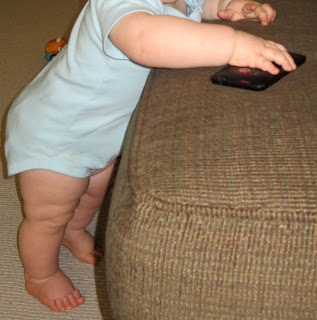 Anyone not impressed by Little E's legs is a liar.