November 17, 2011
Big E is forever claiming he's hungry.  Every time I open the refrigerator or the pantry (even if it is to just throw out trash) he declares his starvation.

I have no idea if he is, in fact, experiencing the signs of hunger or if he is just conditioned to say this.

Instead of just endless snacking all day, I have come up with a genius way of telling if the little guy is truly hungry.

Always on hand here at the Yoys is a giant tub of steamed carrots.  Not what you had in mind for a snack? But what if you were so hungry you'd eat just about anything, including steamed carrots.

So this is my trick.

Today I was putting away groceries and Big E was whining that he was hungry.

I offered him steamed carrots.  He countered with goldfish.  Just like the guy on Pawn Stars, I gave him a worse offer.  That is what you get for trying to bargain with Mrs. Yoy.

Steamed carrots or nothing.  End of story.

Either he is really hungry or he is just desperate, but either way he just scarfed down a whole bowl full of veggies.

And he just told me I'm pretty.   The carrots are clearly improving his vision. 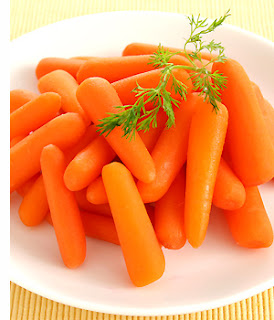