March 15, 2011
Even the mention of these words makes me quiver in my boots.  We are coming upon that time with Big E that we need to at least start thinking about it.  I was going to wait until after my brother's wedding in July, but Big E has been showing some interest in PT.

In general, Big E lets me know when he has to go.  Sometimes he will even string together poopie with toilet.  The first time he said that to me, I scooped him up, pulled down his diaper and ran him to my bathroom.  I tried to sit him down on the toilet and he went ballistic.

He had his hands and feet propped up on the walls.  I could have let go of him and he would have remained suspended about three feet above the toilet, Spiderman style.

Today I went out and bought him a little toilet so we can start talking about Big E's toilet and maybe even get him to sit on it, even if he insists on keeping his pants on.

Based on his earlier reaction, the toilet seems to be very scary for him.  So I was perusing the Babies R Us aisles today looking for a non-threatening toilet.  Is there really such a thing? 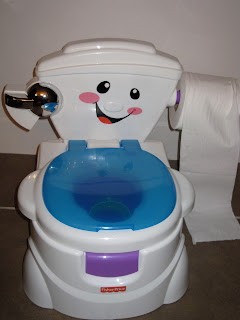 
It even plays music and has a place for his own toilet paper.

Seriously, how amazing is this?  Anyway, he of course, hated it.  I kept telling him this was Big E's toilet, but in an uncharacteristic move, he proclaimed it was Doggie Yoy's toilet.  Hmmmm....at least he is sharing.