October 22, 2012
The plan was to leave my brother's apartment around one on Sunday.  That would give us enough time to catch a cab and make the trek to La Guardia.

As our departure time quickly approached, I mentioned to Big E that he needed to use the potty as we were about to leave.

I DON'T WANT TO LEAVE NY!

I DON'T WANT TO LEAVE THE APARTMENT!

I WANT TO LIVE HERE FOREVER!

I WANT UNCLE D AND AUNT J TO BE MY NEW DADDY AND MOMMY!  (ouch)

It became evident to me, that the process of removing Big E from their apartment was going to require force.  Big E was not going to leave willingly.

Uncle D carried Big E out into the hallway so we could catch an elevator.  Not even the lure of pressing the elevator button could calm Big E down.

He was screaming in their quiet, swank, NYC apartment hallway.

For the record, my brother is visiting in like two weeks.  Big E will see him in two weeks.  We tried explaining that to him.  The concept of time is not a good life lesson to teach to a hysterical child.

I WANT TO SEE YOU IN TWO DAYS, NOT TWO WEEKS!

Over and over again.  Finally, my brother lied and said he'd see him in two days.  We were both desperate.

Two elderly ladies walked over.  They gave us both sympathetic eyes as we waited for the elevator.

Once I had maneuvered the luggage, our coats, and Big E into the elevator and the door closed, Big E began howling.  One of the elderly ladies offered me a lollipop to give to him.

I graciously declined.  Throwing a lollipop into this current sh*t show was not the direction I wanted to go in.

We got to the lobby and I was dragging my roller suitcase with one arm and Big E with the other.

I DON'T WANT TO LEAVE NY!  I WANT TO LIVE HERE FOREVER!

The men at the concierge desk looked up to see what all the commotion was about.

HELLO.  MY NAME IS MRS. YOY AND IT APPEARS THAT I'M KIDNAPPING MY OWN SON.

The lobby was scattered with cool, hip New Yorkers who stared me down as I made my way across the shiny floor.  Big E's screams echoed deep into my soul.  I guess I'll never show my face here, again.

The door man hailed me a cab.  As I threw my purse, coat, and Big E's backpack into the cab, Big E made an escape attempt.

That little turd bolted back into the lobby.

I chased him down and literally carried him to the cab by one arm.  This was bordering ridiculous.

Once I had him in the cab, he continued his crying assault until we made it to Central Park.  Then his sobs turned to simmering whines.

I gave him my phone to play with.

I MISS UNCLE D AND AUNT J SO, SO MUCH.

He was so sad and sincere.

Most of the drama was due to sleep deprivation.  I kept telling myself that.  Two days of staying up late, waking up early, and walking miles and miles was catching up with him.

GET ON THE PLANE AND HE WILL NAP!  YOU WILL SURVIVE!

I was giving myself the world's biggest pep talk in the back of that cab.

Check out the next entry to finds out what happened when we finally made it to the airport.  It was epic. I promise. 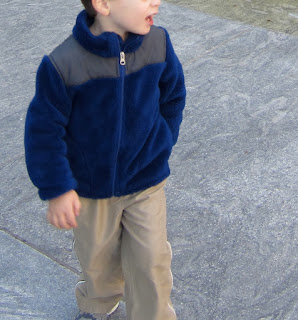 I WANT TO LIVE HERE FOREVER!