October 25, 2012
My kids have cornered the market on the bedtime stall.

I HAVE TO PEE!

WHERE DO WORMS LIVE?

But tonight, I heard a new one.

A few points to note:

1) I COOKED for them tonight.  Like actually created something instead of using the microwave.  They chose to pick at it like baby birds.

2) There is only one reason I can justify keeping a stash of food on my nightstand.  I will admit that while I was nursing the Yoys, I would wake up in the middle of the night and be starving, like fat chick right before sundown on Yom Kippur starving.  I would lean over my nightstand (I'm anti bed crumbs), turn on my vacuum mouth and go to town on whatever goodies I had brought up a few hours earlier at bedtime.

3) This may be my final point, but it is the most impressive.  Big E already knew I wasn't going to let him eat just any snack.  It was going to be on my terms.  He ASKED for the steamed carrots I had cooked at dinner.  Sucker.  But I obliged.  I'm never going to turn down an opportunity to stuff my kid with nutrient rich vegetables.

They chanted in unison.

Anyway, I put Little E in his crib as there isn't much he can do or say about it.  He was only asking for food because of his brother's bad influence.  He cried for two seconds and then he moved on.

I brought Big E a bowl of carrots.  He laid down in bed and began to eat them.

He ate half and put the rest on his nightstand.

FOR LATER, IN CASE I GET HUNGRY. 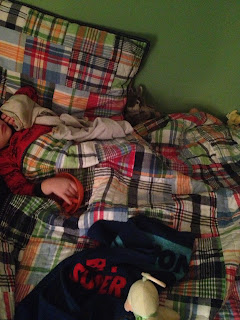 All tucked in with his bowl of carrots.
mommy blog snack stalling