October 31, 2012
Yesterday, I met my old college roommate and her husband for lunch at The Flying Biscuit.

I arrived first with the Yoys and proceeded to set them up for lunch.  This is a major process and can take upwards of five minutes before you actually sit down.

My kids immediately zeroed in on the bowl with the pats of butter.  They each needed a pat of butter. The sugar packets would have been a better choice, in my opinion.  I tried reasoning with them, but as their volume ramped up to a rock concert level, I threw them each a pat of butter.

I can barely type that without gagging.  I watched in horror as they unwrapped and began eating butter.  Plain.  No bread.  No corn.  No nothing.

I could see the customers at the tables next to us looking in disbelief.  I could feel their judging.

About halfway through their butter appetizers, they both decided that butter was gross.

Sweet.  They finally came to their senses.

Big E moved onto his maze workbook and that was the end of the Flying Biscuit Butter Scene.

I had just picked the Yoys up from preschool.  Big E was begging for his maze book.  I glanced back to the car floor where all of Big E's books go to die.  I didn't see the maze book.  He swore he didn't bring it into the house.

Aha!  I had thrown it in my diaper bag at the restaurant.  I dug down into my diaper bag and pulled out Big E's beloved maze book.  I tossed it back to him and he was happy.

I turned around to see a butter face.

Somehow, Big E's half eaten pat of butter had made its way to the cover of the maze book.  It was now covering his hands, his face, and the harness of his car seat.  Of course, he was eating it.

I still haven't gathered up the courage to look in my diaper bag.  I imagine butter streaks all over my stuff.

Maybe later.  After I survive Halloween and have had a glass of wine. 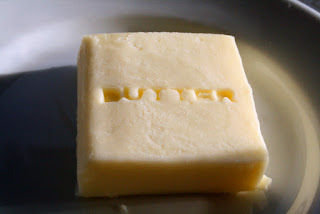 Imagine this, melted and smeared all over Big E.