Come On Ride The Train. Hey, Ride It.

I suck.  I know.  Please don't lose faith.  I promise to be better about writing.

Now onto the story.

Mr. Yoy and I were feeling invincible.  We started Sunday afternoon by taking BOTH YOYS to see Hotel Transylvania (very cute, by the way).

Yes, we took Little E to a full length film.  He ate movie theatre popcorn for a record 90 minutes straight.  But he was quiet.  And to all the people sitting by us, that was all that mattered.  So what if his sodium levels reached record highs.

After the successful trip to the movies, we were on top of the world.

OUR KIDS ARE THE GREATEST KIDS ON THE PLANET.  SO WELL BEHAVED AND AMAZING!

We decided to take them on the little train that snakes around Atlantic Station.

When we arrived at the "station" most of the cars were full.  I wasn't about to let them ride without us, so the four of us crammed into a car that was already occupied by a brother/sister combo.  I would guess they were around seven or eight years old.

Once all six of us were uncomfortably settled into the car, the brother/sister combo received some last minute instructions from their parents, who wisely chose not to ride with their kids.

Are these seemingly innocent children going to beat the sh*t out of us while we cruise the shopping center?  I am basically defenseless as my arms are pinned behind my back to make room for my kids.

The train steamed off and the boys were in heaven.  They waved.  They laughed.  They made train noises.

Mr. Yoy and I were earning major brownie points this evening.

Big E soon realized he had a captive audience.

Mr. Yoy soon realized Big E would shout out any statement fed to him to our audience of window shoppers.

I could see the gleam of excitement in Mr. Yoy's eyes.  He was about to start trouble.

It started out harmless, but escalated to full out obnoxiousness.

MY NAME IS BIG E!

IS THAT THE NEW iPHONE?

Mr. Yoy took a break from his puppet show to discipline the brother/sister combo who now resembled Holyfield vs Tyson.

Big E began slamming his head into the train car and laughing.  The brother/sister combo followed.

IS EVERYTHING OK BACK THERE?

Great, now the conductor is judging us for not being able to control our kids plus these two little random terrors we were shackled with.

Although this train ride to hell seemed to last forever, we pulled back to the station about seven minutes later.

There went $12 that could have been much better spent. 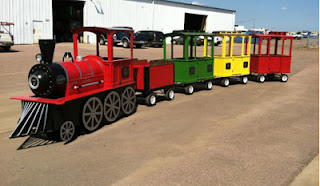 Picture us all crammed in one of these.  Awesome.