October 24, 2012
There is a homeless shelter that we drive pass on the way to school.

We have driven by there approximately one million times since Big E was born in 2008.

Today it peaked his interest as we drove home from school.

I always struggle with questions such as these.  Do I give him the hard facts?  Do I say apartments? He is almost four, but I'm not sure how much information he can process.

I opt for the truth.

IT'S A HOMELESS SHELTER.

Silently, I plead that that will end this line of questioning.  Next topic, please.

Again, I debate launching into the definition of homeless.

IT'S FOR PEOPLE WHO HAVE NOWHERE ELSE TO LIVE.  WITHOUT THE SHELTER, THEY'D HAVE TO SLEEP IN THE STREET.

He thought for a few seconds.  I could hear his brain cranking from the back seat.

BUT SLEEPING IN THE STREET WOULD BE SO HARD.

He's speaking literally, of course, but his words have such deeper meaning.

MAYBE IF THEY HAD PILLOWS THE STREET WOULDN'T BE SO HARD.

Now he is problem solving.

ALSO, IF THEY SLEEP IN THE STREET THEY WOULD GET RUN OVER BY CARS.

This is the street fear I have instilled in him.  YES!

It was so fascinating to hear his take on being homeless.

I explained to him the benefit of having the shelter.

WOULDN'T IT BE EASIER TO SLEEP IN THE SHELTER WHERE THEY HAVE A BED AND A ROOF?

He was quiet for a minute.

I SUPPOSE SO, MOMMY.

So serious.  So sweet. 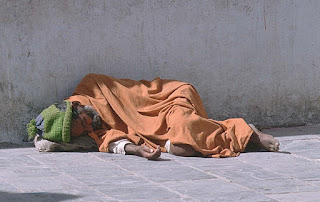