Big E: What A Prick!

October 14, 2012
Yesterday, we took the Yoys to get flu shots at their pediatrician's office.

Of course, we waited until the last hour of the last day of the doctor's weekend flu shot clinic.

I knew it was going to be bad.  I was just delaying the pain.

Earlier in the day, Big E had thrown a passionate and intense temper tantrum.  I timed it at 40 minutes.

That is the average time of my elliptical workouts.  I can barely breathe at the end of 40 minutes.  How is it that Big E can scream and cry and kick for that long and then turn it off like a faucet and be normal?  I find this fascinating and a little disconcerting.  Especially because he is just shy of four, and everyone said that age two was the worst for tantrums. LIARS.  ALL OF YOU.

Anyway, after his little fit, any sympathy I had for him and the impending flu shot evaporated.  He was on his own.

As we pulled into the doctor's parking deck, I could hear the panic in Big E's voice.

WHY ARE WE AT THE DOCTOR'S?

In that moment, I had to decide if I was going to tell him the truth or do a shot ambush.

I went with the truth.  Just FYI, honesty is NOT always the best policy with preschoolers. Tuck that little nugget away.

I DON'T WANT TO GET A SHOT!

He repeated this phrase approximately 236 times.

It fell on deaf ears.

Mr. Yoy somehow convinced Big E to walk into the office.  I thought we'd have to carry him kicking and screaming.

Once we reached the receptionist's area, Big E began to plead his case as to why he didn't want a flu shot to the women at the front desk.

They all tried to hide their laughter and smiles but it was pretty funny.  And pathetic.

I DON'T NEED A SHOT!

I WON'T GET THE FLU!

I WANT TO GO TO THE BIRTHDAY PARTY!  (We were actually en route to a birthday party. This was just a fun little pit stop.)

It was like watching a Mini Mr. Yoy work the judge in a courtroom.  It was uncanny.

He wasn't gaining any headway with the receptionists, so he moved on to the Grandma waiting with her daughter and granddaughter for a flu shot.

I DON'T NEED A SHOT!

He pleaded with the older women.

She sent me sad eyes.

DON'T FEEL BAD FOR HIM!  HE HAS EARNED THIS SHOT TODAY!

I didn't actually say that aloud, as I was playing the role of the sympathetic mom.

Big E continued to make his case to anyone that passed by.  Kids.  Parents.  Nurses. Corpses.

It didn't matter.  He was hell bent on getting out of this.

The nurse walked in and Big E made one last heartfelt statement.

She smiled and asked which one of us wanted to hold him in our laps.

And in two seconds it was over.

All that wasted energy.

I'm sure you were wondering where Little E was in this story.  He was great until he received his shot. 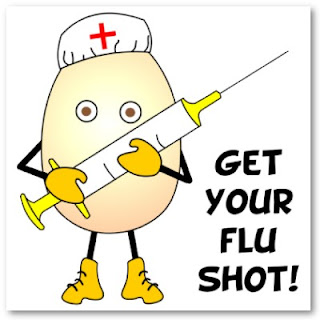