March 17, 2020
I opened my eyes and had a moment that I thought I had overslept. That one second of panic that pumps your adrenaline so hard, you could flip a car.  The sunlight that was beginning to creep into our bedroom had fooled me.

Moments later, Little E, the schedule sergeant, bounded in to inform me we had to get up and go on our morning walk. Today I was a little more enthusiastic as I craved the fresh air. I threw on my quarantine uniform, leggings and a sweatshirt and met Little E in the hall. He had put on his full camouflage outfit, vest and sweatpants, and I had put on my camouflage sweatshirt. We perfectly coordinated, but didn't match, like early 2000s Destiny's child, but without the singing talent.

We are the Jewish Duck Dynasty

After our walk, the teachers' emails came flooding in with their real assignments. Phew. Tangible work. I was getting worried that I'd have two homeschool dropouts.

I set them up at the kitchen island to work and that lasted about ten minutes. They took turns powering off each other's computers and within moments, everyone was screaming. 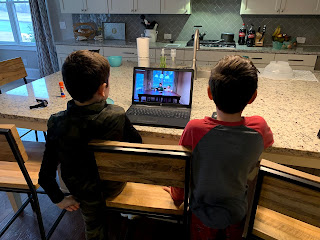 MOM! BIG E KNOCKED MY HEAD OFF WITH YOUR WEDDING ALBUM!

I have one kid who is motivated to get his work done, so he can be done and enjoy his day.

I have one kid who is the opposite of motivated and once asked if he could shorten his name because it was too long to write out.

I'm sure you can figure out which is which.

I decided to use a lifeline. I facetimed Uncle Yoy, a retired HS physics teacher. Little E perked up for Science and he asked Uncle Yoy all sorts of questions about forces. Daily Science. CHECK!

After our lunch, a step up from yesterday's Organic lunchables, they played a rousing game of hide-n-seek, incorporating their school recorders.  If you had a really good hiding spot, and your brother couldn't find you, you quickly blew your recorder as a hint. I thought it would work way better with shofars, but at this point, I'm just white noise, and no one is listening to me.

As captain of Team No Fun, I ended the game, so they could start back on school work. I begged Little E to write. He had a total freak-out and I decided it was time for Mrs. Yoy to take a break. I locked myself in the office. Little E parked himself outside the door. 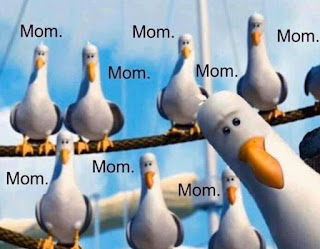 He did this for like 30 minutes, but finally wore himself out and agreed to work on his writing.

I finished my time out and came out to the family room. Little E had written three more paragraphs of his story, but in the meantime, I'm not sure what the hell happened while I was in the office. It looked like the game of Clue had come to life on my rug. 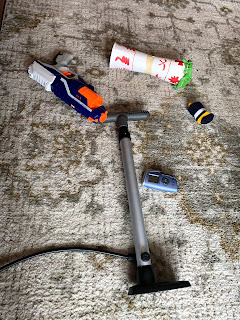 I'll take Ms. Scarlett in the family room with the manual tire pump. Scratch that. With the nerf gun.

We moved on to our favorite teacher, Professor YouTube. Today's lesson was an important and relevant one with summer approaching. 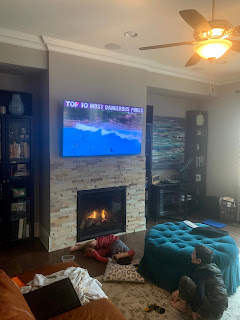 I give you: Top Ten Most Dangerous Pools.

Next up was snacks. For me. Not them. My kids have many faults, but one of them is not the constant need to eat. So I settled in with my passive aggressive BFF, Skinny Pop. 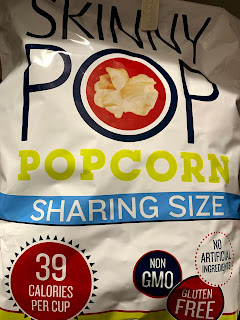 I will not feel badly about not sharing this giant bag with anyone but my feelings.

To be honest, the amount of learning done today was just eh. Better than yesterday, but definitely not like a normal school day. I'm trying not to freak out about them having brain atrophy.

Social networking is so important during this time of isolation, but all these posts of people's kids willingly and excitedly doing their schoolwork is concerning for me.  What the hell is wrong with my kids? Why do they give absolutely zero sh*ts about getting their work done?  Am I the worst teacher in the world? Things to ponder as I lay my worried head down for the night.