I just got back from my second walk of the day and I'm thankful for the beautiful sunshine. I'm pretending that all this walking will offset the bag of chocolate chips I murdered today. 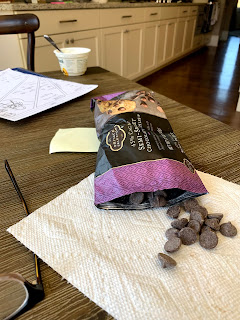 MOM! ARE YOU SERIOUSLY GOING TO FINISH OFF A BAG OF CHOCOLATE CHIPS? - Says the judgy kid who requested a cream cheese and turkey sandwich for lunch.

Today was not my best day. Like Little E who had a bad day last week, I, too, woke up on the wrong side of the quarantine. I was short tempered (which is unlike me) and had already fought with Big E before Mr. Yoy had even left for work. I locked myself in the office to begin the day and cool off.

I listened to them fight and get their work done (I think) from the safety of the office. After I had composed myself I went out to check the carnage. Not too bad, I might add. They had done most of their work and were requesting an early lunch (after eating an enormous breakfast). These little guys better be six feet tall by the time they are re-released into the wild.

I'D LIKE SOMETHING WITH CREAM CHEESE AND PROTEIN. CAN YOU MAKE ME SUSHI?

This was Big E's lunch request. After I stopped laughing, I searched our ever emptier fridge and pulled out deli turkey. This is all I had. Shockingly, he agreed to a (gag) turkey and cream cheese sandwich. 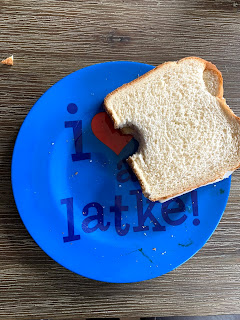 He made it one bite before throwing in the towel.

After lunch they watched TV for a bit, I puzzled, and at 12:30, I suggested we go outside. I went upstairs to dig out their spirit wear shirts as today was school spirit day. I'm sure the dryer ate some clothes because I couldn't find Little E's shirt anywhere.

I hear Little E screaming and I find him on the stairs. Crying hysterically.

Big E had kicked him square in the chest while I was upstairs.

I lost it. I told them computer time was over and to hand them over. I feel like the computers scramble their damn brains and we are riding the struggle bus straight to addiction-town.

I'M NOT GIVING YOU THIS. I HAVE TOO MUCH SCHOOLWORK TO DO!

This is a laughable statement as five minutes before he had told me how he had completed all of his assignments. I asked him multiple times and he refused, which infuriated me. I'm in charge (but at this moment, it was debatable). I went back upstairs and threw a tantrum of my own, of which I'm not proud of, but I'm being honest here. I lost it. I took a stack of books from Big E's dresser and threw them off, creating quite the commotion. He came bounding up the stairs, shocked by the noise. He was stunned.

I used this moment to rush back downstairs, grab his computer, and place it safely in a good hiding spot.

I, again, locked myself in the office to cool down. Time out twice in one day. I was going for the record. I had lost control of this homeschool.

I went back upstairs and found Big E. We definitely needed to have a heart-to-heart. I apologized for erupting like a volcano on him. I'm a slow simmer, but when I finally go off, it's a big one. This was like Pompeii. We talked about how stressed we all were in this unique situation and how I needed him to be just a tiny bit compliant. It is a challenge for him, because he "knows everything already". It's so hard to go through my day asking my kids to do things and their number one, go-to response is either 1) no 2) no (but in a whining voice) 3) no with a suggestion on what they should do instead or 4) never yes. I also asked him to leave Little E alone. For whatever reason, they feel like they need to sit .5 inches from each other at all times and it just invites stupid fights and chaos. I explained we all had our own rooms and this was the time to use them.

After our talk, we tackled our next activity, P.E. The boys dusted off Mr. Yoy's birthday present and took turns between rowing and other exercise intervals. 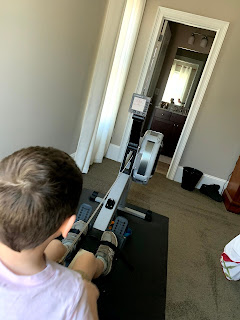 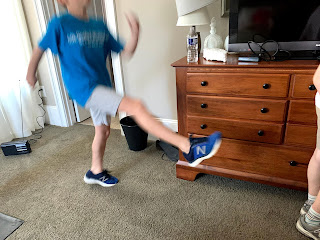 We headed back downstairs to do a little more work. Big E needed to work on his ELA assignment, a comic book based on a fairy tale. Big E agreed (shockingly) and pulled out his create your own comic book and began to work. 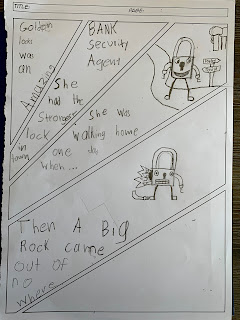 I mean, how cute is this Goldilocks?

After ELA, we worked on letters for the Breman Jewish Home residents. They aren't allowed any visitors so letters are drawings are being requested to brighten their day. Little E made the cutest comic book. Big E wrote a letter and drew the USS Missouri. I mean, who doesn't want a picture of a naval ship? 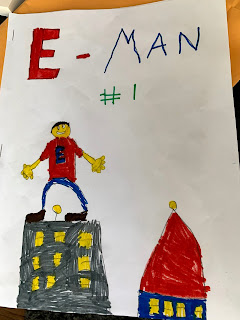 I worked on our grocery list as we are quickly blowing through produce and while an all potato chip diet sounds good in theory, I don't think it is sustainable for our digestive systems.

So there it is. It isn't pretty. I'll admit it, I'm struggling. But I'm still trying. I cannot always control what happens to me, but I can control how I react. Today I did a terrible job. I let my temper win. I'm praying tomorrow I will do better.

I hope everyone has a good evening.