Six o'clock already I was just in the middle of a dream...

Monday. Manic Monday. But really it could be any day. The Bangles were really on to something. My Manic Monday pendulum swings from grateful that we are healthy and can be together to feeling trapped and worried that things will never be "normal" again. But chin up, I've got some momming and teaching to do.

Little E woke up pumped because he was going to have his first zoom call with his entire class. He wore his Rosh Hashanah finest to log on and tell his classmates and teachers all the crazy, weird stuff we've been doing to fill the hours. He's currently on hour four of building some centipede origami thing that technically is an assignment from his Target teacher, but he has done ZERO of his regular classwork in a gold medal procrastination performance. I can't even come at him for not doing his work because he keeps pulling up his teacher's blog and showing me this assignment. So, there's that. 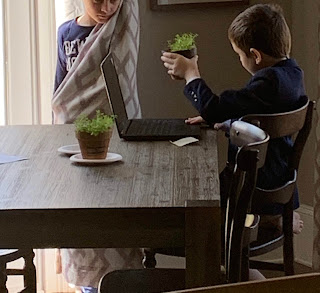 Big E was big-time jealous that Little E got to see his class. As Little E showed everyone his Passover parsley plant he was growing, Big E wrapped himself in my beloved curtains, and creepily observed his little brother.

Big E finished his work in about 28 seconds. Or at least it felt like it. It was 11:30 and he was already accelerating lunch time. I'm just thinking ahead here...if we eat lunch at 11:30, then we eat dinner at 4:30 and everyone is asleep by 8. I think this is how it goes...except nobody in this house has seen a pillow before 10:30PM since we've been in quarantine jail. So I think this is the day the Yoys get introduced to the phenomenon known as the 4th meal.

As I got up to prepare lunch, I caught sight of Big E outside chatting with his friends, from a distance, of course. For the record, it is 73 degrees here in Georgia. So I guess my question would be... 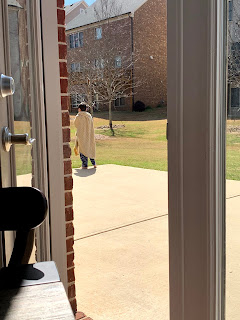 WHY IS MY KID WEARING A BLANKET?

Today's lunch n learn topic was about the world's shortest and longest wars. The longest war was about 700 years long, which to me, seems like a lot of effort. You have to be really stubborn to hold a grudge for multiple human lifetimes. Which leads me to the world's shortest war. This video was way wrong. It said like 14 hours. But I'd like to throw my hat into the ring. The war on my daily sanity is usually won about 2.5 hours after my feet hit the floor. The victor is always my children. 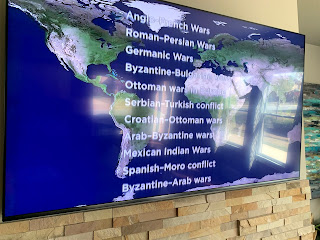 We are very heavy on wars in this house. If Big E ever runs for office, you'll want to remember this fun fact.

After lunch, I decided to head out into the sunshine and work on the yard. I had some weeds that had taken over this one spot and it was all I could see when I looked out my window. I asked Big E to help and surprisingly, he agreed. I explained that we had to get these weeds out of the ground. 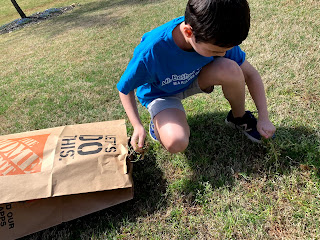 Big E solemnly asked me this question. I tried explaining that in certain states it was legal (and probably never in Georgia), but per the Federal government it was illegal and we had a nice conversation about Federal vs. States' Rights.  It also reminded me that he was always listening. GOVERNMENT = CHECK.

Big E abandoned my weed pulling and joined our neighbors for some lap running around the neighborhood. They ended up running for about an hour, and I was so happy that he finally left the house, got some sunshine, and worked up a sweat. P.E = CHECK.

I did my own adult level P. E. class. After weed pulling, I dug out a dead shrub and swept out the garage and front porch. Then I ate a donut. I'm basically Homer Simpson now.

Big E attempted to have his after school Kids TV Club online. The teacher's sound wouldn't work. Oh, the irony. He did get another assignment due next week. I paid hundreds of dollars for this club and now I have extra work. He has to make a comedy video.

Hold up, Big E. Whatever street you are about to go down, I want to turn around right now.

4pm. I was still struggling to get Little E to finish (or debatably START his classwork). But I found my friend and we hung for awhile. 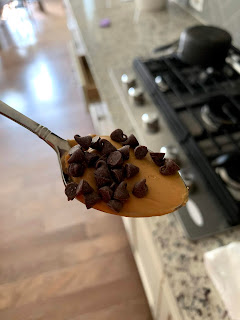 After peanut butter chocolate time, I took the boys out back to jump rope. P.E, again, CHECK! We listened to such classic 90s gems as Jump Around and Jump! I showed off my mad jump roping skills, courtesy of my high school basketball coach, while simultaneously trying not to pee my pants. 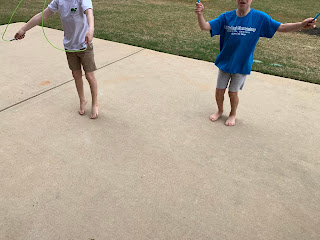 Bladder collateral damage from carrying the Yoys is no joke.

It's 5:30. A fine time to start preparing our third meal. I took the Switch out of hibernation, so Little E is quietly playing at my feet. Big E is working on his Boy Scout requirements for an online call later this evening. The poodle just walked in, looked me dead in the eyes, and peed in my office. Everything is as it should be.