March 20, 2020
Everybody's working for the weekend, right? Except in our new world, there are no weekends. Every day is the same.

Friday. I find myself digging deep for my zen.

We had such a good day yesterday and I really thought we were moving in the right direction. But just like the virus that has us all locked away, my kids' behaviors and emotions come in waves.

Little E woke up on the wrong side of the quarantine and everything for him has been a struggle today. School work. Life. Meals.

The Yoysers are only 20 months apart. This presents some challenges. But the absolute best part of them being one grade apart, is that Big E did all of Little E's work last year. So if Mrs. Yoy can't figure it out (look, it happens...), Big E usually knows how to help.

I captured a sweet moment for the boys before things headed South.

They wrapped up their assigned work a little before lunchtime. I had a couple of optional assignments for them.

First off, we sorted our Tupperware cabinet, which is Mr. Yoy's worst nightmare. He wakes up in a cold sweat thinking about that time he had to find a matching container and lid. In general, I'm a super organized person. But this cabinet is low and I'm so tall that I can't see what's really going on in there, and that's fine by me. 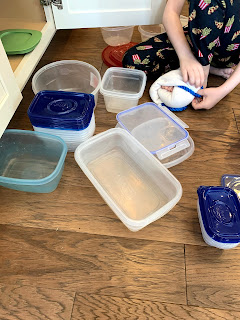 We talked about volume and measurements and I checked that math standard off the list.

Next up, we headed into our government and civics class. I give to you... 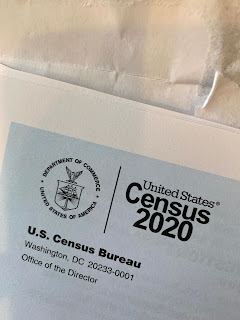 We went online together and filled out the 2020 Census. We talked about the different questions and why they were asked. 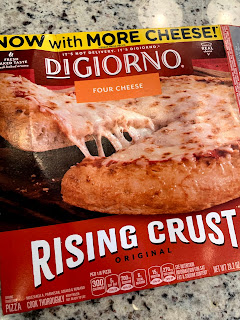 This is DiGiorno, not delivery. They said, in a much different tone than in the commercials.

Look, beggars can't be choosers, so they ate their half-risen, half-baked pizza. Today's lunch n learn topic, as presented by Professor YouTube was an engrossing, thirty minute video about country boundary changes from 1918-2018. I recently returned from a trip to Poland, and I can tell you, depending on the year, my family was either Polish, Lithuanian, or Russian. 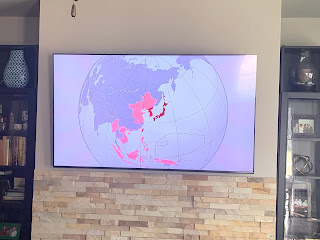 Geography AND History? Man, I was killing it today in extra subjects.

Dispersed between all of our learning and class changes, there was a lot of ticky tack fighting between the boys. If this homeschool had lockers, Big E would have stuffed Little E into it. Coupled with the internet coming and going like my UPS driver, tensions were very high. Little E cried and whined a lot. I tried to bring him out of his trance, but it was very challenging.

Big E went outside to run in the sprinklers, a repeat activity, I know. Little E claimed his foot was injured by his brother, so he stayed indoors and pouted. Big E ran around like he was filming a Dude Perfect video, but he's neither a dude, nor perfect, so it wasn't really working for him. 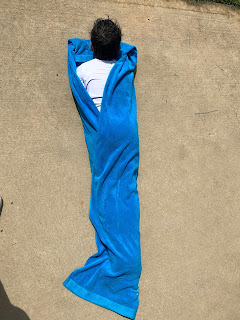 I did have the opportunity to swaddle Big E like I use to do when he was a baby and it was very satisfying. If only he stayed wrapped up the remainder of the day. Instead, he focused all his energy on teasing Little E.

I prepared my challah for shabbat and tried to keep the peace between the boys. It was like refereeing a four hour WWE match in my home. They were knocking over chairs and running into walls. I kept waiting for the Rock to roll in through the front door and finish them both off. They would pause for a bit, laugh and giggle, and then move back to the murder zone.

I attempted a zoom call with my leadership class, and Little E sat in my lap, devil whispering about fixing the WiFi the whole entire time. Thank goodness I could stay on mute, for the most part.

Before I lit the shabbat candles, I begged them to chill out for the evening. I just needed some quiet. Some peace. 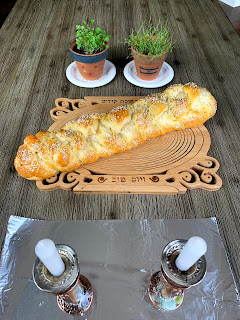 We had dinner and since then, they've been eerily calm. I think all the wrestling wore them out.

I'm trying to keep perspective. I know that as hard as this has been on me, it's also been very hard on the boys. We have plenty of food and Mr. Yoy is still gainfully employed. We are very fortunate compared to so many others in our community.

I leave you tonight with a quote from one of my favorite writers, Glennon Doyle.

WE CAN DO HARD THINGS.

Because we can. And we will.