March 18, 2020
Y'all. It's Wednesday. Only Wednesday. But I will say, we are falling into our new routine of utter chaos. I'm going to admit it. I'm trying to maintain some sort of schedule. But I'm terrible at it. Neither child wants to do the same thing during the same period, so I'm basically running around plugging holes on this sinking ship.

This morning began with a blowout with Big E. I asked him to join us on our morning walk.

I told him he could run.

I told him he could ride his bike.

On Tuesday, I let this slide, but then I watched as he stayed indoors and was a complete sloth the whole day. Without my prompting, he would turn to stone.

IF YOU DON'T GO WITH US, I'M NOT MAKING YOU ANY MEALS TODAY!

Little E and I left, and I half expected Big E to join us on our route. But he didn't.  When we returned, Little E asked for a piece of fruit and Big E asked for a bagel. Just like any stubborn mom locked in her house would do, I cut up a peach for Little E, and stone cold ignored Big E.

He started high pitch whining for a bagel. Mr. Yoy broke first, stomped downstairs and angrily made him a bagel. His tolerance for whining is at level negative 1,000. He asked Big E and me to make peace. How are we going to survive if we are constantly at an impasse? We are both the same level of stubbornness and it's a lethal combo.

10AM and I was already so upset. I guess things could only go up from here.

I asked the boys to work on their writing prompts. Big E hammered out the qualifications for his new, child-run government.

I feel like these are all very solid qualifications...

Next, I struggled through some 4th and 5th grade math. My self-esteem was down in the dumps, so I retrieved my most prized possession from the depths of my closet, and carried it around with me for the rest of the day. I beamed with pride as I overheard Little E tell his friend via google hangout, did you know my mom was once a famous math champion? 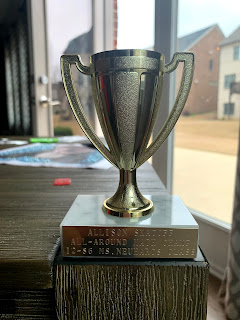 My 5th Grade All-Around Math Champion Trophy. Proof that greatness once lived here. And by here, I mean inside my brain.

Our lunchtime lesson was brought to us by Professor YouTube and the Statue of Liberty. I bet you didn't know that there was a dispute between New York, New Jersey, and Lady Liberty. 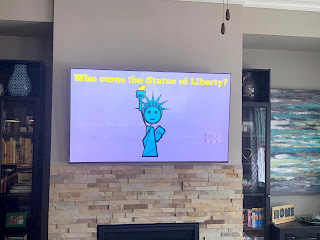 The afternoon was a jumble of legos and YouTube videos and origami. I felt like we did ok, especially because they had at 6:30 online Hebrew school call and I didn't want to push my luck.

We broke out the keyboard and recorders to work on our new jam band, The Quarantiners. None of us can really read music so we researched the notes and wrote them in the song book I had optimistically purchased when Little E first received his keyboard. 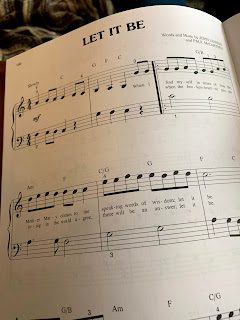 We made it through the first verse and then everyone got distracted. But I thought we sounded pretty good and we sent the video to my dad to cheer him up.

I gave up on the day around 7:30 and walked over to my neighbor's driveway to sit with the other moms (at an appropriate distance) and decompress. It's less isolating to know that we are all struggling in some capacity.

The boys are still awake. These days are unending. But, after our initial fight, we had a decent day. I played four square. I danced like a fool. I folded origami. I learned to play the piano (sort of). When was the last time I made the time to play like this with my kids?