Tax Day! Well, usually, anyway. It reminds me of cheap-wine fueled blowouts at the Three Dollar Cafe in Buckhead. Surrounded by my CPA family, celebrating the end of another grueling busy season.

Today is much different, with the exception of the cheap-wine.

This morning started off a bit bumpy. Little E could not get his WI-FI working on his computer. In general, when it isn't working, it's because I've paused it through my handy-dandy Xfinity app or he's run out WI-FI for the day, also set through the app. He immediately came at me for pausing his WI-FI, which I didn't. I did, a few weeks back, unplug all internet coming into the house after the boys refused to put down their devices. I basically unplugged a bunch of wires that led to blinking lights and boxes. According to the experts, and by experts I mean the Yoys, ever since my tantrum, the internet just hasn't been the same. Little E really let me have it and with that, I put on my sneakers and peaced out. Mr. Yoy talked Little E down from his cliff and when I returned he apologized to me. The WI-FI IS currently working and I've touched nothing all day. So, please let me just have this...

Sometimes, Comcast just sucks. And there is no back room magic parenting happening.

While I was walking, Big E was hard at work on my MAC, which WAS working. He was doing his math assignment, which sometimes he asks for help with. In my absence, things must have gotten dicey as I found the best book ever written sitting next to the keyboard. 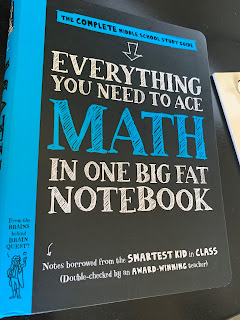 Little E finished up his assigned work and we used this time to write a letter to his grandparents. They so kindly offered to buy him something fun to do on Amazon (within budget) as they know how bored he is. A few stipulations...no video games and no drones. We have purchased and wrecked approximately 23 drones, each one more expensive than the next. In the end, it doesn't matter how many protective cages they have around the propellers, that thing is going down in a blaze of glory.

Little E picked something out WAY over budget, so I suggested he write a persuasive essay about why he deserves this: 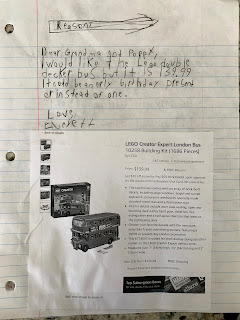 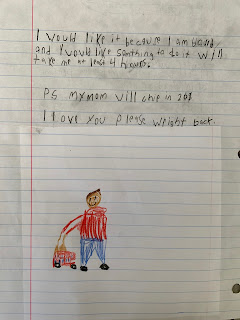 I told him he had to use his neatest handwriting as his grandparents were very old and their vision was very poor. (WRITING and ART = CHECK!) We dropped it in the mail today and we'll see how this goes...

Next we headed outside to play some badminton with our new net and rackets. (P.E.=CHECK!) May I just say this, we are not waspy enough to excel at this traditional country club sport. Big E kept telling me how he was excellent because his camp counselor taught him to play and his counselor played in the badminton minor leagues in Australia. This last statement reeks of bullsh*t, but since I can't get Tom in Australia on the horn, I'm going to have to take it at face value. 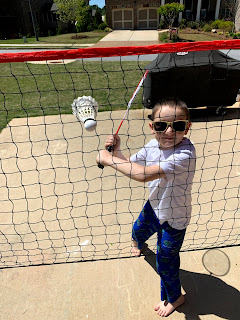 THIS BIRDIE STUCK IN THE NET BASICALLY SUMS UP 2020 SO FAR.

I migrated from our new makeshift badminton court to my tree. Every year I put down new river rocks to border the bed, and every year the constant wear and tear of this tree being in the middle of the backyard gang's playing field, makes these rocks mysteriously disappear. But I've got nothing but time. So I started digging and excavated a bunch of rocks that had been buried by mulch and dirt. I was so proud of my yard work. So if you need me, I'll be waiting in my driveway for my YARD OF THE MONTH award. 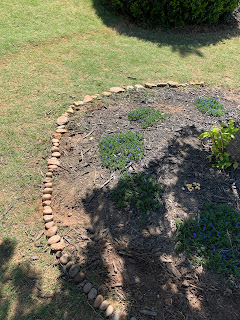 I did get a splinter right at the tip of my finger as I vigorously dug out the rocks. It's still in there. Mocking me. I'll need a manicure STAT.

I came inside to find that Big E had hit up the pantry and committed another pantry mortal sin. The first being leaving EMPTY CONTAINERS IN THERE. 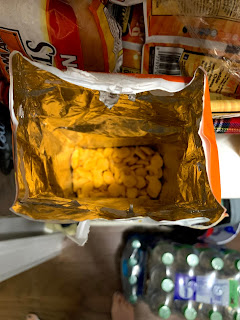 This. Just an open bag. For ants, roaches, dust, and any other items that haunt your nightmares to crawl on in and make themselves a new home. I explained this to Big E and even showed him the clothes pins that Mr. Yoy had bought in bulk. We had enough to close every bag in our house, including my Prada. Just use it. He nodded.

I walked back into the pantry after dinner to put something away. 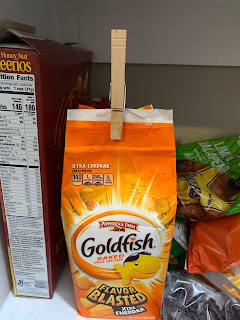 This. It's not folded down. The top is open on ether side of the clip. Do I cry? Do I laugh? Do I guzzle the rest of the goldfish to teach him a valuable lesson? Seriously. When I go to therapy after this is all over, the lack of pantry etiquette will be at the top of my list.

I hope everyone is having a good week.

Have a good evening!