I was up early this morning and quickly got up and out for my walk. It was cold. Like 38. I tried to walk out the stress. The disappointment. The sadness.

Big E casually mentioned, as I laced up my sneakers, that he acted like he was happy yesterday, "SUMMER IS HERE" were his actual words, but now that he had had some time to think about it, he really wanted to go back to school and finish 5th grade with his friends. It hit a nerve.

The cold air felt good, but soon my eyes were watering. At least that is what I claimed if passing neighbors happened to comment. But really I was crying. The enormity of what had unfolded over the past month hit me like a train. 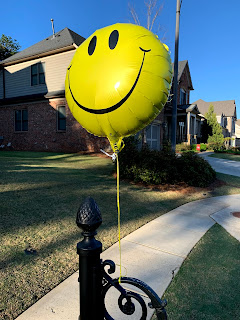 Even the sweet balloons that a neighbor had anonymously tied to a bunch of mailboxes in my neighborhood failed to cheer me up.

After I fixed them breakfast, I asked the Yoys to start their school work as it was creeping closer to 10:30AM.

I'LL DO IT LATER.

Cool. I knew for a fact that Mr. Yoy had spoken to Big E last night about being more agreeable for me.   He seemed to take that suggestion nugget to heart.

I DON'T KNOW WHERE MY ASSIGNMENT SHEET IS. CAN YOU GO UPSTAIRS AND FIND IT?

I looked at Little E and walked into the office and locked it.

Aunt Yoy called to talk about everything and I unloaded on her. Not many things can shake my steady disposition, but this has rocked me. I'm sure I'm not the only one feeling this way today, I think after the wine and sleep, this morning brought a completely different, unnerving reality, than just 24 hours ago. I had still been holding out hope that they'd go back for a few weeks. Enough for me to retrieve my sanity. Get a pedi. Take a breath. Have lunch with a girlfriend and complain about first world problems. Resume some normalcy. Basic stuff.

I came out after Little E proclaimed through the locked door that he was done with his work for the day. I have no idea if he actually did any work.

I fixed myself my lunch (spoiler alert, it was a generous slice of Publix cake) and sat down for today's lunch and learn topic: 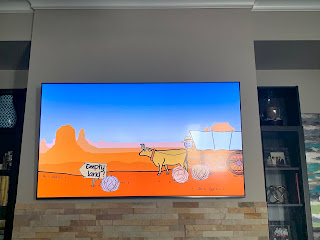 They are not indigenous to the American West. They are from Eurasia! They roll across the landscape to spread their seed. I guess they are sort of like Aerosmith.  (Science = CHECK)

After Big E ate his lunch of reheated McDonald's chicken nuggets, he did head outside to run laps. That was probably the highlight of my day. He left the house. I used this time to hide their computers. BAZINGA!

Little E and I worked on cards for the residents and staff at Jewish Homelife. 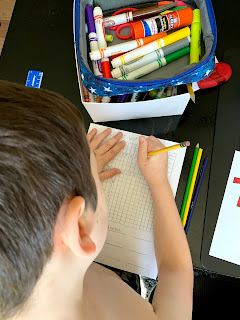 His handwriting is generally trash, so I used this opportunity to work on it with him. His 4th grade teacher can barely read his writing, how would an elderly person be able to read it? (Handwriting = CHECK)

Around 4PM we received an email from our school system telling us their grades as of 3/13 would be their final grades for the year. They could work to improve them, but they would be no lower. I think this was more for the high schoolers, but there is NO WAY IN HELL I will breathe this truth to them. Their current mission statement is already DO THE LEAST, DO IT FAST, NOTHING MATTERS, and this would be the end of the already fragile Yoyser Homeschool for the Defiant and Mouthy.

I'm currently ticking down the minutes until my coast-to-coast 8PM Zoom call with my family. I'm going to try and fix my face so I don't frighten them. Things aren't looking good. And by things, I mean my face.

Have a good night.