New for April: NOTHING.

Today is my wedding anniversary. Mr. Yoy has convinced the boys to wait on us during our dinner tonight, but I'm not 100% convinced my kids won't spit or sneeze in my food, payback for being "too serious about this homeschool thing".

I had a couple of hours of insomnia last night, thinking about all the terrible things happening in our world. So I slept in. And so did my kids. When they came into my room this morning to retrieve their computers, I told them that Cobb County had canceled next week's Spring Break and that they would continue receiving digital assignments. Big E gave a low whine with a quivering bottom lip to match. Little E began crying.

Even if the rest of the day was a total dumpster fire, I had fooled them for about 30 seconds and it made my battered soul feel a little better.

Little E has been rockin' a shirtless school uniform, but because the temps had cooled off significantly, I made him put on a shirt today.

Little E came downstairs to begin school. I found comfort in his positive message t-shirt. Yes, I've got this. I do. Except once I got closer, I realized he had put his shirt on backwards. So do I really got this? Even more concerning, does he...?

The boys got setup for school and I ran back upstairs to chat up Mr. Yoy about our Umi sushi dinner plans and other current events. I could hear Little E's primal screams. They wrapped their way up our stairwell and into our bedroom. Two sets of heavy footsteps sprinting on the stairs and then there he was. Crying. Big E had turned off Little E's computer in the middle of a quiz he was working on. He was so upset.

I JUST WANT BIG E TO LEAVE ME ALONE!

Same, Little E, same. We set Little E up on our pimp green velvet couch and locked our bedroom door so Big E could not mess with him anymore. Mr. Yoy went to talk to Big E about being a terrorist. 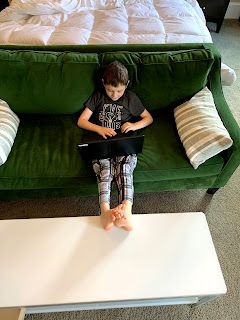 Peace and quiet, except for the sound of his brain cranking.

They finished up their work at an alarmingly fast rate. I even quizzed Little E on his assignments, and whether he actually did them or not, he was able to explain everything. So...now what.

We checked out our garden and were shocked to see sprouts only after three days. We numbered all the pots (eight of them) and had to look up what green vegetable we were looking at. 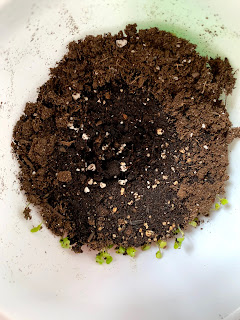 It was broccoli and there were audible BOOS about this. I mean, they planted the seeds so why are they so surprised and angry? It wasn't ever going to be chocolate chip cookies.

The boys dug out their walkie talkies. I suggested they take them out on their bikes and play a game. Big E had a much better idea. He turned the volume up all the way and placed the walkie-talkies next to each other. 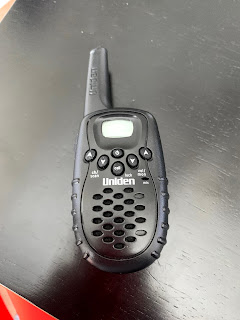 And I thought the techno music was bad. I wasn't prepared for the constant feedback screeching sound that had become the soundtrack to my morning.  I was trying to do some Sisterhood work and this was really helping.  Little E stealthily stole one of the walkie-talkies and I quickly buried it in some random bag, hopefully never to see the light of day, again.

I distracted Big E from the prospect of searching for his missing walkie-talkie, with the prospect of lunch. He requested SPIZZA. This is a meal he made up, I think. It's pasta (usually spaghetti) on top of pizza. And since my nutrition standards consist of 1) Is it moldy? and 2) Does it take under 2 minutes to prep?, SPIZZA was an acceptable choice for lunch. 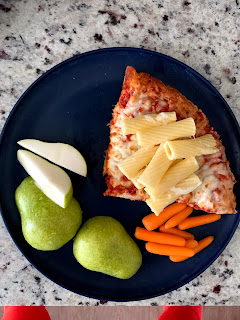 Here it is in all its carbohydrate glory.

This afternoon's activity was brought to you by the mailbox and a can of lysol spray. Little E and I walked up to our mailboxes to retrieve about a week's worth of mail.

First off, we finally got our stimulus check. This put me in a fantastic mood, which led me to purchase this chair from the Sharper Image Catalog, which conveniently also arrived in the mail today... 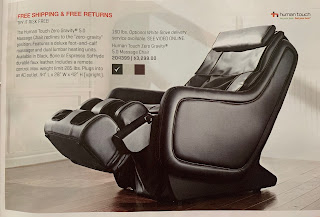 The Absolute Best Chair Ever

My neighbor has one of these beauties and I'd be lying if I didn't admit to thinking about breaking into her house to visit with this chair. Also, just leaving this here in case Mr. Yoy wants to buy me a last minute anniversary present. What do they say about your 14th wedding anniversary? A massage chair from the Sharper Image Catalog?

But our best surprise came in the form of a letter from our family in St. Louis. They sent one questionnaire to each boy with great dilemmas such as WOULD YOU RATHER BE BALD OR COVERED IN HAIR? 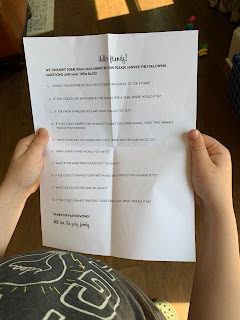 AND WHAT IS YOUR ANSWER?! I'M ALL ABOUT SOME HAIR AND A RAZOR!

We spent the afternoon out back. I blew bubbles, while the boys ran around and popped them. I'm counting this as P.E. for the day. We haven't played with bubbles like this since they were little guys. My neighbor, and older single woman, walked by and commented that we must be bored. I looked at her with pleading eyes. Look, I'm just trying to survive here, lady. These boys are TOUGH. 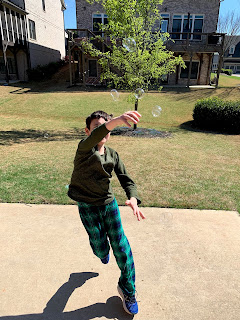 Little E and I attempted to bake cookies. It started out promising... 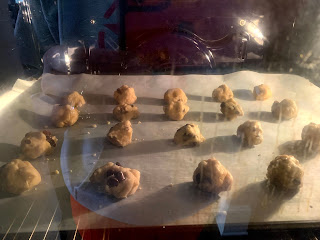 But mid-bake of our first batch, news that the governor had called off school for the rest of the year sent me reeling. I took the cookie dough, went to the pantry, and had my moment. It included some tears, I'm not going to lie. The doorbell rang and woke me from my trance. 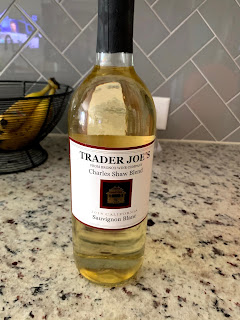 TWO BUCK CHUCK: For all that ails you.

My neighbor was handing these out like water bottles at a soccer game. I was so grateful that I started to cry again. She asked if I was crying for myself or for the boys. Initially, I thought it was for myself. I'm stressed. But then I saw Big E's face and I knew I was crying for him, too. He's in 5th grade. No graduation. No 5th grade hall walk. He won't be back to say goodbye to all his teachers and friends that are off to different schools. It's all so final and sad.

Mr. Yoy will be home in a bit with our anniversary sushi. I'm trying to keep positive. We are healthy. Our parents are healthy. And as my friend pointed out, I'll have months worth of funny blogs to read through years from now when we look back on this insanely trying time.