The past two days have been Passoverrific. So much matzo and awkward stomach noises and feelings.

Like so many of my friends and family, the giant seders of years past were gone. We ate at our modest kitchen table. I still spent the time to set everything up. It was calming, even if Little E gave Big E a bloody nose in the midst of my preparation. I pulled out the plague props, a favorite of the Yoys, and the subject of the Sunday school zoom class fiasco. I pulled out the fancy wine glasses. Even for the boys. 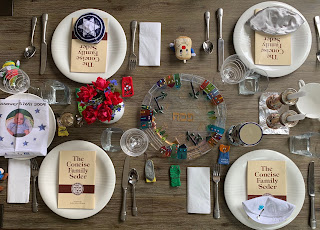 How cute is my matzo cover? Big E at 6 months. I use it every year and so far he has tolerated it.

The boys held it together for the actual Seder, but once we broke out for dinner, the wrestling match began. Thankfully, our friends and family on our video chat could not see what they were doing. They were moving furniture. Shouting. Laughing. Sweating. A piece of our sectional couch basically ended up in our foyer. I tried half-heartedly to stop them, but I was tired and had drank way too much sweet kosher wine. So we let them have at it. Maybe they would tire out. They didn't. But they did decide to both sleep in Big E's room last night. Or as they called it, quarantining, so their fighting was light-hearted. 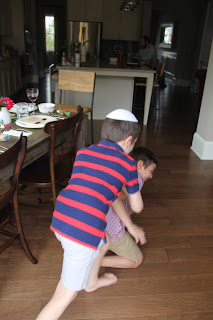 This morning we decided today was the day to move our potted vegetable plants to our designated garden on the side of our house. Much to our delight, we saw that last Fall's Halloween pumpkin that we had composted had sprouted a new vine. (NOT INTENTIONALLY TRYING TO LEARN, BUT SCIENCE = CHECK!) 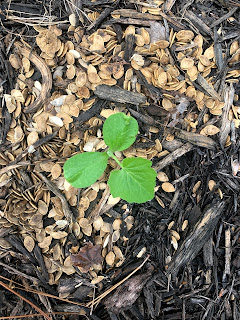 And the main event...

True story. Like two weeks before the sh*t hit the fan, I cleaned out this closet by our garage door which is our dumping zone. We have no basement, so I try to cram as much crap in here, until I can't. And then I have to clean it out. There was a bin of "outside" toys. I had a giant ziplock of sidewalk chalk that the boys hadn't touched in years. And I pitched it. Ugh.

As soon as school was called I went onto Amazon to order sidewalk chalk. It was already sold out, so I bought drawing chalk. The delivery time was sometime in April. I actually thought that by the time this chalk got here, they'd be back in school. Feel free to take this moment to laugh/cry together.

I immediately got to work on my sweet-a** tiger. I was very proud of my work. Especially since my artistic abilities had been buried for so many years. 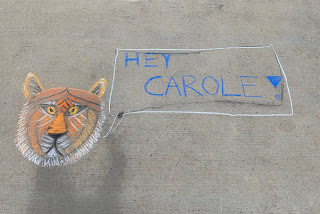 Did she or didn't she?

Little E helped me shade the tiger and then moved onto his own art, a beautiful sailboat scene. It felt so good to be out in the sunshine, getting messy with chalk, and getting my creativity out. 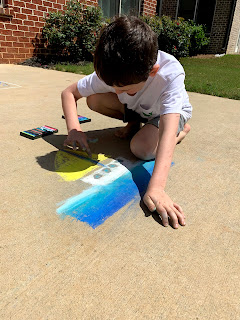 Little E told me he learned to shade in art class in school. It made me weepy.

Tonight's seder was lower key. This means I stayed in my pajama/workout clothes. After Elijah came to visit (at a safe distance), we spoke about those lost to senseless tyranny, beginning with Pharaoh, but continuing on to modern day.

My family asked me to speak about my recent trip to Auschwitz and I retold the story I had heard, during our tour, of the Jewish women that were able to pull together a Passover Seder in their barracks. In the midst of the ultimate hell, they still had hope. I remember when I left there I had such perspective. Perspective that comes and goes in waves depending on how overwhelmed I am feeling during this quarantine. 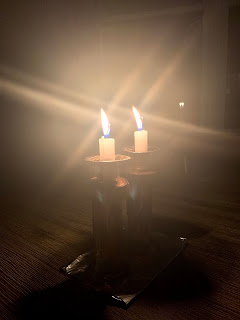