Spring Break is upon us folks in Cobb County.

Break is the correct word to describe so many things, except this damn quarantine.

Both boys had Zoom calls with their respective classes to kick off their day. They were both very pleased to see everyone.

Big E stayed in his bed for an impressive amount of time. He finally made his way downstairs around 11.

I sat down next to Little E and went line by line through his assignments. He still tried to talk his way out of each one, but we made it through.

I got sucked into Author's Purpose Jeopardy. PIE= Persuade, Inform, Entertain. See, Mrs. Yoy is learning things, too. Unfortunately it was like halfway through the game that I figured this out and I couldn't recover from my initial deficit.  Little E hooked the game up to our T.V., which always amazes me that he knows how to do this. I now know how my parents must have felt the first time we showed them how to use AOL messenger. Brain. Explodes.

There is a big difference between "humped" and "jumped" and this typo added an extra element of awkwardness to this game.

We moved onto lunch. Jeopardy! had made me very hungry. Luckily, Mr. Yoy had ordered me my most favorite meal, a Yummus Bowl from Clean Juice. It was a shock to my system to not be eating utter garbage. 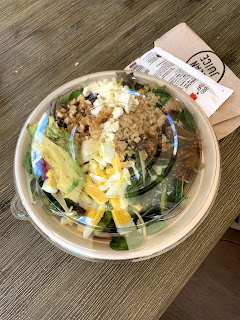 Big E had been rattling on all morning about ghost babies, so I promised him our lunch n learn topic would  be just that. Today I learned that before the IRS was founded, people would claim like 15 kids on their tax returns, because it was based on an honor system, reaping great tax benefits. In real life, these people had zero kids, but the government referred to the fake kids as ghost babies. This farce eventually lead to social security numbers for all. 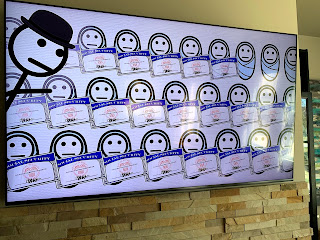 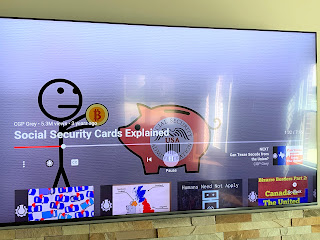 Tell me you knew that.

After lunch we read our books for the assigned minimum of 20 minutes. I had to put the timer on my phone. Because g-d forbid they do one second of extra work. They will not be had. As a nine year old, if you told me I HAD to read, I'd take my 45 Sweet Valley High Books, find a comfy chair, and I'd see you in like four hours. This clearly is not an inheritable trait. 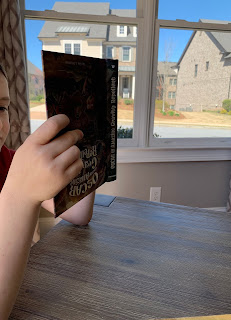 But you can't leave this kid alone for a minute. I THOUGHT Little E was reading. He wasn't.

After reading time, they were done. Or at least I was. They joined forces in a Minecraft World (again, I have zero idea about what happens here), but they quieted down. Enough for me to try my luck at Instacart. Is there really anything as "Insta" as Wednesday, April 8th at noon? 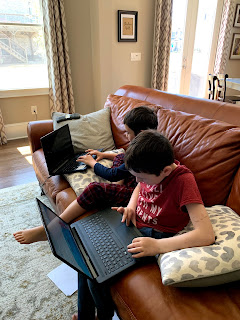 IT WILL NOT LET ME ENCHANT MY HO! - Little E

It might actually be a "hoe", but "ho" makes Minecraft seem way more interesting to me. After playing nicely for about 45 minutes they began fighting. Not in real life. In Minecraft. I cannot make this up. But Mr. Yoy pointed out that it least they weren't actually swinging on each other. I did notice that Big E has picked up the yell/clap from me. He was letting Little E have it and there was my patented move,  you yell and emphasize each word with a clap. It's awful watching someone else do it and I'm going to try and retire that move immediately.

It's currently 5:30. I have not yelled at my kids. I have not left my house, but hopefully will get out for a walk later, and I haven't changed into my daytime pajamas. Mr. Yoy worked from home today. And even though he's been locked in our bedroom most of the day, I feel like it definitely changed the dynamics. We had transitioned from zone defense to man-to-man.

Thanks for reading and all of your support.

Have a good evening!