I had four zoom* calls. (*Mr. Yoy came in while I was writing and asked me to change this to Zoom Platform calls so as not to make their trademark generic).

I saw so many friends and supportive faces today.

Tonight's blog is dedicated to them. For helping me connect with other adults and chip away at my isolation. I'm using a tool I learned from them to present this blog:

What am I rocking right now? Hmmm...naps, sneaking out for walks, and Zoom Platform calls. I plum wore myself out talking on calls all day and I snuck in a 15 minute nap around 4:30PM. It was perfect. Little E and I rolled downstairs around 6PM to fix dinner. Big E was camped out on the couch watching YouTube videos. Apparently, he wasn't thrilled that we had "invaded his space." What happened next was a 45 minute meltdown over sharing space on our massive leather couch.

Big E politely asked Little E to go into the other room. His switch was too loud. Little E muted it, but Big E decided it wasn't enough. He wanted him to move off "his" couch. Which is weird, because we were in the family room. The couch we have all laid on for like 12 years. If you've been to my house, you've enjoyed my couch, too. Because it's awesome. But, I complemented Big E on expressing his feelings to his brother. This is an improvement over the immediate beat down.

Little E was hellbent on staying on that couch. I suggested our sweet green velvet couch in our bedroom for him to satisfy his need to lounge. That was a no. What about the sectional in your playroom? Also a no.

There was no winning this fight. I built a giant pillow wall between the boys. See Big E, you won't even know he's there...but alas, the wall came down and the fighting continued.

It ended with everyone crying, including me. Because I tried so hard to keep calm. I prayed out loud for the strength to stay calm. And in the end, I still dropped an "F" bomb on my children. Not like they haven't heard it before, but I still am not proud of myself when I lose my cool.

The boys were fine within 10 minutes of Big E cooling off. We had dinner and they kept asking why I wasn't talking. Let this be their first of many lessons of dealing with women. It takes longer than three seconds to get over arguments. It just does. They ate their dinners and went about their evening. I snuck out for a second walk. I had to cool off. I ran into a neighbor and we both vented about our kids. It was so helpful. Probably more than she knew.

What do I want to stick around after we are sprung from quarantine? Playing with my kids. I've played so much with my kids over the past seven weeks. Badminton, chalk, Sushi Go! They are actually pretty fun when they are not zombie tablet children.

Beyond my kids, I've been able to talk to friends I haven't talked to, like really talked to, in so long. My to-do list is normally all consuming. I don't think it has to be that way, and I see that now.

My phone is already in my hand. Instead of reading celebrity news on People, I can call a friend. I will get so much more out of it. I mean, how many pictures of Reese Witherspoon walking her dog while wearing a mask do I need to see?

What do I want to "leaf" behind? Homeschooling. Pay the teachers all the damn money, they have earned it. And then some. I was working with Little E today on converting fractions into decimals. Something I can do in my sleep, except I don't know how to teach it to him. I'm using 1980s math, which most of you already know is not = to 2020 math. As I was showing Little E my work and process on paper he started crying.

He was frustrated. I was frustrated because I couldn't translate my knowledge into a usable format for him. But I did appreciate the "numbers" reference. When Mr. Yoy talks to me about legal issues and I am lost, I usually reply with "MEMOS MEMOS MEMOS!" I think Little E inherited my sense of humor, but that is basically it.

On one of my many calls today, one of my mentors said something very profound.

WE HAVE ALL BEEN SENT TO OUR ROOMS TO CLEAN UP.

I love this. I am home. Forcibly hyper-focused on my children. I can let everything fall to shit or I can use this time to make myself a better parent and human. Some days, I can't make anything better. I just can't. But the awareness that I've been granted during this unique situation, is invaluable.

So tomorrow, I will try to do better. It's all I can do. 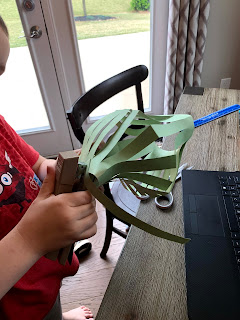 Hard at work making a latern. 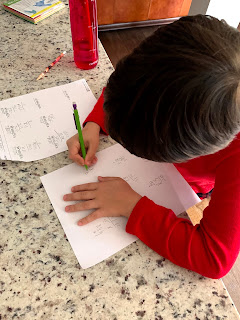