Big E: All talk, no action

September 17, 2011
Big E is infatuated with all things firefighter.  He loves driving by the firehouses to see the pretty red engines parked outside.  He loves playing with his firetruck and watching Fireman Sam on tv.  I know, I know, you get it.

I'm pretty sure he would set our house on fire if he realized that would result in a firetruck and many fireman taking over our street.  On a side note, Mr. Yoy and I would probably not mind because that is probably the only way we'll ever get out of our house.

This morning we were in the car.  We pulled up to a red light when we noticed just past the intersection there were five firetrucks and about 20 firefighters practicing a drill.  This was the jackpot of firefighters.

We pointed them out to Big E.  He got all excited. We rolled down his window and told him that when we drive by he should yell out hello to all the nice firefighters.

The light turned green and Mr. Yoy creeped the minivan up to the firefighters.

Mr. Yoy drove on.  What in the world just happened here? Why is he being such a wuss?

He's done this before and we can't figure it out.  I guess it is all part of being two and very temperamental.

Later this morning he asked to go back and see the firetrucks. 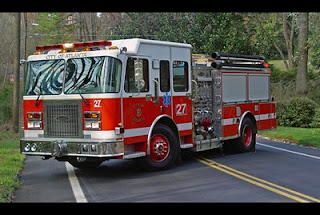