The Next Sandy Koufax?

September 09, 2011
Before we had children, Mr. Yoy informed me that the two main genetic traits I needed to pass down to them were my tall and left-handed genes.

You see, Mr. Yoy isn't all that tall and I am a Jewish giant. Think Tom Cruise and Katie Holmes, except we are way better looking.

Mr. Yoy wants Big E to be Sandy Koufax.  Nice Jewish boy, multiple Cy Young winner, retired at 30.  He even refused to pitch in the World Series because it fell on the Kip.  No pressure.

We realize it is too early to really determine which hand Big E is going to favor, but everytime he picks up a crayon and starts drawing away with his left hand, Mr. Yoy and I have a party.  Streamers.  Balloons.  Everything.  We are so excited.

And then five minutes later he is coloring away with his right.  And we are insanely sad.  We are manic parents.

What's that?  Big E is actually holding a fork and it is in his left hand?  This is it!  The moment of truth!  Only to be replaced with disappointment when Big E uses the fork to brush his hair instead of eat his meal.

Ouch!  I know Big E just pegged me in the head with a nerf ball, but what hand did he throw it with?

In a few years, we will know the answer for sure.  In the meantime, we'll just watch for signs.  And hope.

Side note:  In case you were wondering I definitely failed to pass the tall gene down to my kids.  They are both midgets.  I'm hoping I don't go 0-2 on the genetics. 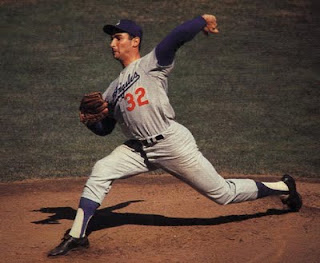 Who needs a doctor, I'm going to have myself a major league pitcher!
sports