September 06, 2011
Do you remember this amazing Nickelodeon game show from the late 80s?  I may just be dating myself here, but do you?

The basis of the show centered around two kids searching for a hidden object in a staged room.  In the process the kids destroy the room leaving nothing untouched.

Think police looking for drugs during a bust, not like I would know or anything...

So you are probably wondering why I am rambling on about some dumb cable game show that ran for all of two seasons.

Every evening after the Yoys have gone to bed.  I spend about 30 minutes making the house livable again.  This includes their playroom that has many bins and baskets to organize and store toys.

When I am finished, the room looks catalog ready!  Who wouldn't want to play in there?

Morning rolls around and I usually bring the Yoys downstairs around 8.  We eat breakfast and then I unleash them on the house.

By 8:22, their once picture-perfect playroom looks like it has been used for the Finders Keepers show.  It is breathtaking, in a bad way.  How can two little kids wreak such havoc in such a small window of time?

Next time I walk in there and they are pulling all of the toys out of their respective bins, I'm going to launch thousands of ping pong balls at them (show reference).

Anyway, my Type A personality wants to clean it all up immediately, but I know this is futile.  So I resist until the end of the day. 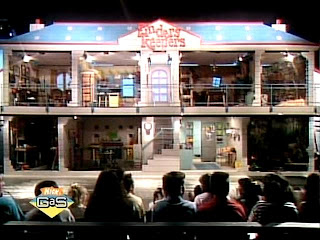