I'M GONNA WASH YOUR MOUTH OUT WITH SOAP!

November 07, 2011
This was definitely a top five mom phrase heard throughout my childhood.
Other greatest hits included:
1) I'M GONNA FIX YOUR WAGON! (still unsure of the meaning but implicated Grade A trouble)
2) IF YOU HAVE TO KNOW NOW, THE ANSWER IS NO! (good one!)
3) PIGS GET FAT, HOGS GET SLAUGHTERED (wait-we are Jewish)
4) SO BUTTONS (her response to whenever I said SO)
You would think I was being raised by sailors (one of them actually was) based on the frequency of my mouth washing.  I, apparently, had A LOT to cuss about as a young child.  I blame HBO.
I think this threat will be nothing but idle for Big E.
During our outside escapades this afternoon, Big E was attempting to blow bubbles.  I watched him ingest half a bottle of bubbles in the process.  The directions for bubble blowing do not include drinking the liquid, at least I don't think they do.
I checked the bottle and the bubbles are non-toxic.  So that was a positive.
Big E clearly did not mind the taste as he began chewing on the bubble wand.  The kid was practically burping up bubbles the rest of the day.
I'll have to come up with a new cuss word deterrent for when Johnny Schoolkid teaches Big E some unsavory words, as eating soap does not phase him.
Any suggestions? 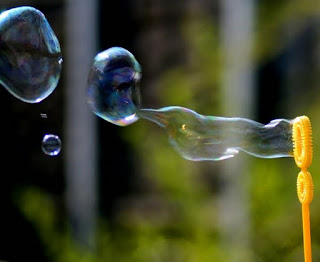