We were on the verge of Little E's nap time.  He was starting to get edgy.

The slower I drove, the louder Little E's cries became until it evolved into full-on screaming.  Oy.

I wish I had lights and a siren like an ambulance or fire truck that I could flip on in crying emergencies that would allow me to zip home.  I promise I would use it sparingly and only when the Yoys had a true meltdown emergency.

For a moment, I congratulated myself on such a good idea, but then was brought back to reality by Little E's hysteria. Poor little guy.  He just wants his bed.

I reached back with my crazy long monkey arms and tried to soothe him.  It was no use.  He had crossed over to the dark side.

I spent 45 minutes in the car with a screaming Little E.

Now excuse me while I go down a bottle of Chardonnay and try to unwind from the drive. 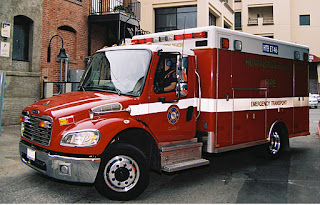 This looks just like my van.  All I need is the siren!
crying Little E traffic