Let me start by saying I love our pediatrician.  We share a first name and she went to Harvard and John Hopkins. How can you go wrong?

The office is in Buckhead with seven total doctors.  I'm not going to lie.  On most visits, that place is a total madhouse.  A few years back they remodeled the office and expanded.  It was after Big E was born, so it wasn't that long ago.

They broke the waiting rooms up into two rooms, by doctor, NOT by sick vs well visits.  My obgyn sends his kids there as well.  When I mentioned my gripe to him, he explained that they have done studies that have shown it doesn't make a difference if the kids are kept separate or mingled while waiting.

Which leads me to today.

We had an early appointment and for once it was pretty quiet.  There was one little boy in the Dr. K waiting area with me.

I wasn't around in the 14th century, nor am I a medical doctor, but I'm pretty sure this little guy was presenting with the Bubonic Plague.  He looked horrible.  His cough was horrible.  I wanted to wrap my healthy Little E in a blanket like he was one of Michael Jackson's kids.

With every cough I felt myself giving his mother the evil eye.  I couldn't stop.

I had to control the urge to shout:

HOW DARE YOU BRING YOUR KID IN PUBLIC LIKE THAT?

I was mostly irritated because he was old enough to know to cough into his elbow, but he wasn't doing it.  Nor was his mother suggesting he do it.  He was just spewing his Bubonic germs across the room towards us Yoys.

It was like a scene from Outbreak.  I bet you thought I was going to say Contagian.  But alas, I haven't seen a movie since the mid-90s, so Outbreak would have been the better guess.

Thankfully, they called Little E back.  We did have to walk through the Bubonic cloud of death to get to the exam room.

We met with Dr. K and I was thrilled to learn that Little E had only gained a few ounces since his last check-up and had grown two inches.  He was no longer a potential contestant on The Baby Biggest Loser.

Little E had a great check-up and as long as he doesn't come down with the Bubonic Plague in the next 24-48 hours, I'd say we had a pretty good visit. 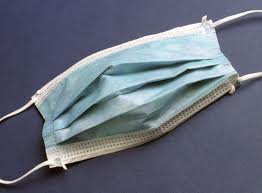 The Yoys will be wearing these the next time we hit up Dr. K's.
doctor Little E's size