A glimpse of the Yoy future?

November 05, 2011
Today the Yoys went on an adventure to another country, Alpharetta, GA.

Mr. Yoy was participating in a charity softball tournament in the 'burbs.  We don't venture there often so we packed no fewer than three suitcases, food, milk, an outlet adapter (hey, you never know when you might need to blow dry your hair), and our Garmin.

After Mr. Yoy's team gave up a close one in round one, I decided it was time to take the little Yoys home.  Mr. Yoy would catch a ride home with one of his teammates.

Mr. Yoy walked me out to help me load up the bus.  And that's when he came upon it.

A pee-wee football game.  Those little boys in their football helmets, it was cuteness overload.

I have always maintained that my boys are playing baseball, not football.  I don't want to deal with the injuries that come along with contact sports.  This was swaying even my iron-clad decision of no Yoy football.

The outfits and the cheering fans were intoxicating. Along with the fall weather and the changing leaves, I felt like we were watching some sort of Northeastern Yuppie documentary.

IF YOU DON'T STEP UP AND PLAY HARD, OUR WHOLE SEASON IS OVER!!!

A screaming mad-man interrupted my dream sequence of Big E being the star quarterback.

It was their head coach.  And he was pissed.  Holy moly, these kids couldn't be older than 7 or 8 and they were being lambasted.

This snapped me back to reality.  I turned back to Mr. Yoy.

I don't even yell at our own kids like that.  I don't want some random coach to have all the fun.

Mr. Yoy was fascinated by the screaming coach and the fact that these little kids had just executed a Statue of Liberty play (I have no idea what this is, but Mr. Yoy was REALLY impressed).

So this is where Will Muschamp ends up after he gets fired from UF.


The quarter ended so all the action moved to the other end of the field.  We continued on to the car.

Mr. Yoy was convinced that the boys wouldn't be hurt playing at this level.  I'm still unsure.  I guess we have a few years to decide, but I'm still leaning towards little league. 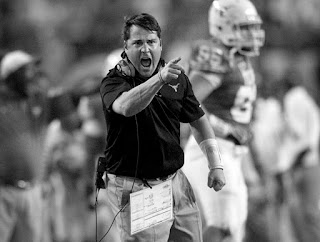 You think my screaming is bad?  Wait until you see the "stare"!
football Will Muschamp