February 18, 2013
This evening's fight to the death battle was over a two day old birthday party balloon.

I pleaded with Big E to let Little E have it.  The sound of them attempting to rip it from each other's grip was akin to nails on the chalkboard.

It was late in the day and my patience was scarce.

IF YOU DON'T STOP FIGHTING OVER THE BALLOON I'M GOING TO POP IT!

Big E looked at me for a moment.

WITH SCISSORS?  POP IT, MOMMY!

They broke out into a quite catchy, POP IT chant.

Being the people pleaser that I am, I grabbed the scissors and with a dramatic flair stabbed the hell out of the birthday balloon.

And it was over.  Except it wasn't.

The Yoys began crying in unison.

I WANT THE BALLOON BACK!  WHY DID YOU POP IT? I WANT TO PLAY WITH THE STRING!

It took every ounce of will power to return the scissors to their hiding spot instead of where I wanted them to go (my eyeballs). 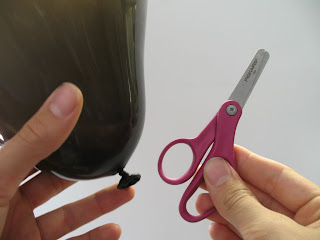