The Yoys: Begging for Boarding School

On Tuesdays and Thursdays we all hang out together.  I try and schedule activities and outings to keep them occupied, but sometimes it doesn't work out that way.  Especially when the weather blows, which it has with some consistency every Tuesday and Thursday since we returned from wintering in Florida.

Today ended up being a lazy day.  Little E and I managed to change into street clothes, but Big E is still in his fleece jammies, per his request.

The following occurred all before lunch was served.

1)  Little E fell down the stairs.  Not a super dramatic, Scarlett O-Hara-esque spill, but enough to scare me.  I watched in horror as his giant head lead the way as he somersaulted down three stairs.  He managed to stop himself one step above the hardwood floor.  The whole event lasted about 10 seconds.  Little E then cried for approximately 20 minutes.  Oy.

2) Big E bit Little E for trying to take control of his playlist on iTunes.  There are many things wrong with the previous sentence, but biting is a major NO-NO at the Yoy house.  Big E earned himself a four-minuter in the penalty box.  He cried the whole time.  Little E also cried as he pointed out the bite marks on the side of his torso.  Another oy.

3) On one of his many bathroom trips, Big E mummified himself with a roll of toilet paper.  I thought he was just in there taking a man dump.  I was out of oys.  I moved onto wine.

I know they are boys and have endless energy, but can't we just enjoy a relaxing day at home?  How about building some Legos and doing a few puzzles?

Maybe their behavior is a cry for help.  I translate it to mean:

I NEED TO BE IN SCHOOL FIVE DAYS A WEEK.  ENROLL ME NOW.

Or maybe something even more drastic:

I NEED TO BE IN BOARDING SCHOOL.  SOMEWHERE IN NEW ENGLAND.

I have about two hours until dinner, bath, and bed time commence.  Let's do this! 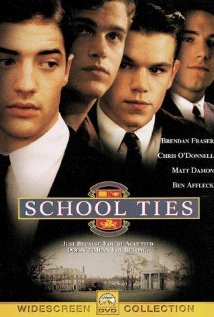 Maybe one of these guys will be Big E's roommate.  They can play on the football squad together until the big game falls on Yom Kippur and then drama ensues.
mommy blog school