February 27, 2013
I have only begun to dip my toes into the cesspool known as organized youth sports.

I missed the window to sign Big E up for spring t-ball, but this is a decision not to be taken lightly, so I'm going to over analyze all our options.

If we lived in Dunwoody along with the other 99% of Atlanta's Jewish population, it would be a no-brainer.  We'd sign Big E up to play at the JCC.  With no traffic we are looking at a thirty minute drive.  With traffic (the most likely scenario) we could maybe get there just in time for the 2015 season.

While traffic is a major deterrent, there is a substantial positive to signing Big E up to play in the Jewish kid league.

Are you going to make me say it?

He'll be playing against other short, athletically-challenged kids.

The Gym at Peachtree Presbyterian (much closer to us) also has a t-ball league.

But do I really want to set Big E up for failure?

He'll be playing against giant, strong, muscle-y, blond boys with cool, one-syllable names like Ford or Beck or Blaine.  They've been bred for generations to be tall and athletic and popular.

It's not that the Jewish people don't have their own set of skills, but the sports gene pool generally runs pretty shallow.

Now if this were a league where you had to perform a self-deprecating comedic act or take the MCAT or possibly produce a Hollywood movie, my kid would have a chance.

For now, I'll keep searching for the right fit. 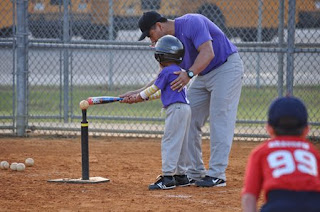