Is it too early to discuss Halloween costumes?

August 30, 2011
I just received a Costume Express catalog in the mail.

I have two main comments.

1)  These things are flippin' expensive.  Forty-five dollars for a three-year-old's costume?  Seriously?  Maybe a good pair of shoes, but a costume that he'll wear for four hours once?  I'm having a hard time climbing aboard that ship.

2) Why are all the little girl models in their pirate/witch/ladybug costumes wearing a ton of makeup and posing provocatively?  I've heard people talking about how young girls are being pressured to act and dress older, but this is making me ill.

Obviously, I'll consult with Big E about his choice for a costume this year, as he'll be nearing three and has many opinions, but it's looking like he'll be a ghost.

A sheet and some scissors - the greatest and least expensive costume ever. 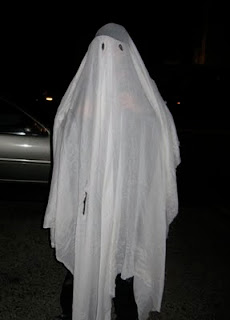