After a brief hospital stint we went over to Uncle and Aunt Yoy's for some decompressing.  We had a lovely time and I even enjoyed a much needed daiquiri.

We were driving home on 285.  We were singing the round version of Row, Row, Row Your Boat, because we are just freaking awesome like that.

Big E seemed to be back to normal and I was so relieved.  Then my phone rang.

It was neighbor Yoy asking us if we were home.  I let her know we were on our way home and asked if everything on the home front was ok.  She informed us Poodle Yoy was sitting by our front door.

My guilty mother feelings that I had been suppressing all day bubbled to the surface.

Am I the worst person on earth?

First, I let my kid fall off a train.

Second, the dog must have slipped out unknowingly when we were loading up for the hospital and we left her in the 90+ degree heat for 6 hours.

But even worse, my first thought was:

The Poodle Yoy is probably pregnant!


We have lots of undesirable stray dogs roaming the streets of Westside Atlanta.  Anything is possible.

The rest of the drive home Mr. Yoy and I discussed what the dog could have been doing all this time.  After composing multiple insane scenarios involving her playing poker in a back alley with the other neighborhood strays and the aforementioned pregnancy, we both agreed she probably just sat staring at the front door until our neighbors spotted her.

We got home and reclaimed the dog.  Other than being a nervous wreck, she seemed to have escaped the mean Atlanta streets just fine.

After that I had to put the Yoys to bed, but I just wanted to put myself to bed.  I felt like a failure.

Erase and start over, please. 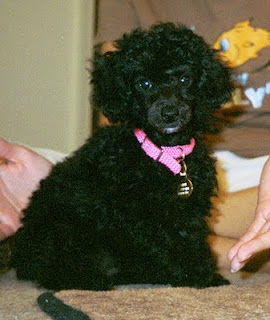 More baby Poodle Yoys on the way?
(p.s. Poodle Yoy is fixed, so this was discussed in jest)
irresponsible parenting