August 20, 2011
Mr. Yoy and hit the town tonight.  We went to a cornucopia of places and had a few adult beverages.  It was really great to get out and be a couple for the evening, instead of Yoy parents.

We arrived home to our babysitter and a quiet household. Perfect!  The sitter went home and Mr. Yoy and I headed upstairs for the night.

I noticed that Big E's blankie was on the floor next to my computer.  Red alert!  This kid is OBSESSED with his blankie.  We have to go and visit it in the laundry room when I wash and dry it.  It is that bad.

Mr. Yoy and I discussed our strategy and planned our next move.  We decided to sneak into Big E's room and place blankie in his crib.  If he reached for it overnight and it wasn't there, it would be armageddon.  That's a risk we were not willing to take.

This is not the first time I have encountered this dilemma.  See The Sound Machine.

As we tiptoed over to the Yoys' rooms we realized while the sound machines were on, they were on very low.  We decided to go into both rooms and crank them.

Mr. Yoy crept into Little E's room.  I noticed the fan was not on and his room gets very stuffy.  I flipped the switch. Whoops!  That was the light, not the fan.  I quickly corrected my mistake but not before I got a death look from Mr. Yoy and then subsequently heard Little E stirring.  Of course, Little E's sound machine shorted out while Mr. Yoy was attempting to turn up the volume. This was turning into a comedy of errors.

We ran out of Little E's room and composed ourselves. Even if Little E had woken up, we were convinced he would go right back to sleep because he is our good sleeper.

Hello Mr. Yoy (in this case he actually used Mr. Yoy's first name).  He was standing in his crib staring at us.  His voice was so calm and monotonous.

I stifled a shriek and ran down the hall.  Seriously, this kid just scared the beeswax out of me!  Why is he just standing there at 10:30 at night?  How weird is he?  I had flashbacks to Silence of the Lambs.  Oh my gosh, is this kid going to eat our faces off after we go to sleep?

Mr. Yoy was much cooler.  He gave Big E his blanket and told him that it would help him sleep, turned up his sound machine, closed the blinds, and walked out.

I had thrown myself onto the couch in a fit of giggles. The two drinks I had ingested at Prohibition were not helping my parenting skills.

And now I'm pretty sure I'm going to have Anthony Hopkins-filled dreams all night.  Thanks Big E. 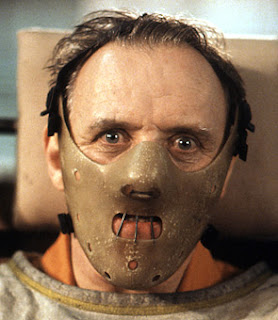 Seriously, this is what Big E looked like.
bedtime