August 16, 2011
I've been feeling some pressure lately to get Big E toilet trained.  It was only compounded today when we went for school orientation and he was the only one in his class that brought in a bag of diapers.

I bought Big E a little toilet a few months back to get him comfortable with the idea of using it.  See Potty Training.

He sometimes sits on it with a diaper.  Sometimes without.  But he never actually uses it.  I knew that if I didn't push (bribe) him, nothing would change and he would be going on dates in his pull-ups.

My mom used M&Ms to train me.  It seemed to work considering I, too, use the toilet.

Today I bought some Pretzel M&Ms.  Partially to encourage Big E, partially to reward me for attempting to toilet train this little Yoy.

I stripped Big E down to his t-shirt and let him run around naked.  Finally, he sat down on his little toilet.  After about 30 minutes, which included pulling all off the toilet paper off the roll and clogging up the big people toilet, he started shouting for some M&Ms.  I figured I could give him a few for sitting there and at least attempting.

What I forgot about Big E, is that he doesn't eat the M&Ms right away.  He lets them melt in his hands, which I believe the maker of M&Ms swears doesn't happen.  Then, while I thought he was sitting on his little toilet in our guest bathroom, he was busy touching the white bathmat and some more toilet paper.

When I peeked in on him again, I saw this orange mess on the toilet paper and thought he may have gone.  Simultaneously I touched the door handle and quickly realized I had been M&M'd.  It was everywhere.

Deep breath for me.

So, I threw everything in the washing machine and clorox wiped all the bathroom door handles.

In the meantime, Big E was back on the toilet because now he was hooked on the M&Ms.  He yelled for me that he had gone.  I went into the bathroom and sure enough, there was a tiny puddle of urine in his toilet.

I have never been so proud of bodily fluid in my entire life.

I hugged Big E and told him what a good job he'd done.  I received no hug in return, just a demand for more M&Ms.  And then his diaper.

After dinner I saw him roam into the dining room, ground zero for most of his post meal poops.  I asked him if he wanted to use his toilet and he yelled no and hid under the table.  And then went to the bathroom.

Clearly, I wasn't expecting a miracle, but at least we took a baby step today. 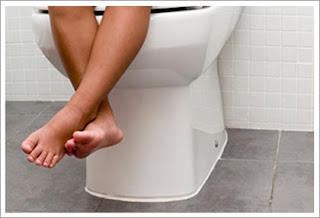