August 02, 2011
Sorry I have been lax on my blogs.  I, like every other 16 year old, got sucked into the Hunger Games Trilogy.  I'm almost done with book two and have pulled myself away to update my readers on the goings-on of the Yoys.

Today we are taking Little E to the doctor for his one year check up.  This will include putting him on the scale.

I find much satisfaction in finding out how much he weighs.

That way, when I'm in public and someone says for the ten millionth time, "HOW MUCH DOES THAT BABY WEIGH??", I will be able to say with much certainty, Little E weighs 27 lbs (which is my guess).

I'll check back in later with his actual weight.

Anyone else want to enter the Yoy weight pool?  Any guesses? 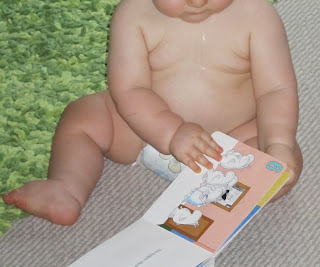