August 11, 2011
This week I am doing a science experiment on Big E.  Don't worry, it is nothing scary or illegal.  I am cutting out his nap to see if I can get him to fall asleep before 10pm.  The late bedtime was killing me.

Monday, Wednesday, and today he went nap free.  Tuesday he napped at 11am because he was acting like a total terrorist.

I am noticing that while he goes to bed blissfully between 7 and 7:30 without his nap, his behavior from about 4 until we start bedtime would best be described as, hmm...how should I put this nicely, HELL ON EARTH.

This leads me to today's example.

I heated up the leftover chicken quesadillas he barely touched at lunch for his dinner.  He picked through them for about 10 minutes and then declared he was all done.

Fine by me, I released him from his booster seat and he jumped on one of his cars and started doing NASCAR laps around the house. At this point, I chucked the quesadillas.  Clearly, he's not going to eat them.

After a few laps, he drives into the kitchen and asks for his quesadillas.  I explained to him that when he told me he was done eating, I threw them in the garbage.

He flew off the handlebars, literally.  He ran to the trash can and reached in for them.  He was absolutely hysterical.  It was like I had thrown away his Thomas train set.

The following thoughts went through my head:
1) You can't let your child rummage through the garbage for his dinner.
Followed by:
2) You did just put in a new trash bag and the only other thing in there was some shredded junk mail.
Which led to my conclusion:
3) Ok Big E, eat your dang quesadillas out of the trash.

My mom was on Skype with us at the time and she supported my decision, so I felt much better about feeding my baby trash.

So, add this to the unacceptable things I have allowed my kid to eat.

See The Boy in the Bubble

and finally, see The Lollipop

I'm hoping Mr. Yoy will continue to let me parent after this one. 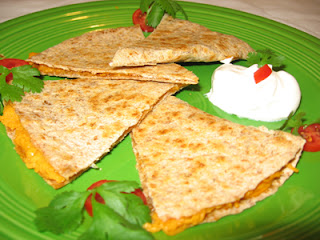 How could you not want to eat these?
boys meal time