I was crazy nervous for him.  His teacher was in the loop on his progress and I felt very confident in her ability to lead him through the day.

I sent two extra pairs of underwear and pants with him.

As he left for school in his skinny jeans, I prayed he'd still be wearing them the next time I saw him.

I tried to keep my mind off what was going on at school.

Was he walking around pants-less, peeing wherever he deemed fit?

Was he crying because he was afraid of the real, although miniature, toilet?

Are his classmates teasing him about it?

But, still, the anticipation was killing me.

I was so anxious as I navigated the hills and curves of Peachtree Battle.  I pulled into school, hopped out of my car and went to retrieve Big E.

I saw him running towards me.

It was like a scene from a movie, slow-mo and all.  And, he was wearing his skinny jeans.  I was ecstatic.

I asked Teacher Yoy about his day.

She had taken him to the bathroom multiple times, but he refused to go.

This kid had held his bladder for over four hours.

I've got to say, now that I've been pregnant twice, I cannot hold my bladder longer than two hours.  I was super impressed with Big E.

But he wasn't going to get a pass from me.  I immediately sat him on the portable potty I now keep in my car.  He refused to go, even with some encouraging words from our Rabbi.

This was putting a wrench in our lunch plans with Mr. Yoy.  He was crying to go home.  I think he wanted to use the bathroom there.  I didn't give in, even though I knew I was taking a huge gamble.

I drove to Mr. Yoy's office and put Big E back on the potty while we waited for Mr. Yoy to come downstairs.

I promised him the moon, but Big E refused to go.

Mr. Yoy came down and joined in on the cheerleading.  He was desperate enough to make a "sssssssssssssssssss" sound.  It freaking worked!  Big E went.  We rejoiced! Passers-by probably thought we had just won the lottery. Parenting is clearly making us insane.

Since we are new to all this, we had no idea how to dispose of the urine.  We sat there for a few minutes trying to figure out the appropriate means.

I finally dumped it on the grass, as I prayed no one was watching, judging.

What if next time there is no grass?  Ugh, I'll worry about that later.

The rest of the day went off without a hitch.  No accidents and lots of bathroom time.

Which leads into what I decided to do next... 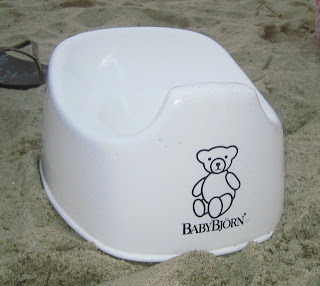 The newest person I'm hauling around in the big red bus these days.  I call him Bjorn.
Big E potty training