January 16, 2012
Only a mere six hours earlier, I blogged about how terrible my kids behaved in their music class.

I had given up hope on the Yoys.  I was in it for eternity with two rotten eggs.  Too bad for me.  I was wallowing in my own pity.

But that is the thing about your kids.  They will drive you to the edge of insanity.  You will wonder what you were thinking trying to be a parent.  You clearly do not have the skill set for this occupation.

Then, they do something wonderful.

Tonight it was bath time.  Usually this consists of a half hour of me yelling at Big E to stop trying to drown his brother, while Little E screams bloody murder.  I have actually looked at the bathroom window and thought to myself:

WILL I FIT THROUGH THIS IF I TRY TO JUMP?

The Yoys were splashing each other and cackling.  They were maniac laughing.  It was contagious.  I began laughing, too.  It was a definite party in this tub.

Once their little T-Rex arms wore out, Little E started scooting towards Big E and he opened his arms and hugged him.  And Big E hugged him back.  And they embraced for a few seconds.

It just made me so happy and it was just about the sweetest thing ever.

I love my kids again.

And I'm filled with hope that maybe two decent men will evolve from these babies. 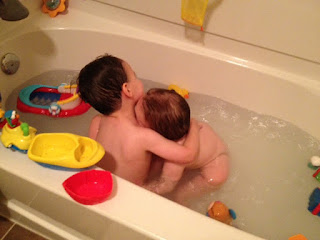 The Yoys having a sweet brother moment.