Do you want the good news or the bad news?

Little E had a wonderful dinner tonight of rotisserie chicken, carrots, avocado, and grapes.  He cleared his plate with the exception of a few pieces of chicken.

Instead of throwing away the chicken, I placed it in Poodle Yoy's bowl so she could have a really good dinner. Consider it her reward for how hard she works at keeping my kitchen floor spotless.  She must not have seen me put the food in her bowl because she is usually all over it.

I took Little E out of his highchair so he could play a little before we began bath time.

Then I ran outside for literally a minute.  I wanted to see if the new flood light sensors I had installed out front were working.  Some were, some weren't, but that's a different story and even more proof that the Yoys aren't "do-ers" no matter what Home Depot says.

Anyway, I hurry back inside because I trust no one.  Not Big E, not Little E, not even the dog.

Big E was lining up the magnets on the fridge.  Weird, but not illegal.

Little E was sitting by the back door with the guiltiest face I've ever seen him wear.  I knew that look anywhere. He had a mouth full of food.

My eyes immediately shifted over to Poodle Yoy's food bowl.  Empty like my pockets.

That little stinker!  He wouldn't eat the food off his own plate, but give it to the dog and Little E gobbles it up like it's a Bone's filet.

I squeeze his cheeks together and I see the chicken in there.

I now have two choices:

1) Reach in his mouth and risk him biting me.  It's happened before, so I'm a little gun shy.

2) Let him finish eating the chicken and hope that none of Poodle Yoy's dog food made its way into his mouth.

So, you see, the good news is Little E finished his dinner. The bad news is, he finished it while eating out of the dog's bowl that probably hasn't been washed since Bush was in office.

Little E seemed fine during bath and story time, so I'm going to call this a victory! 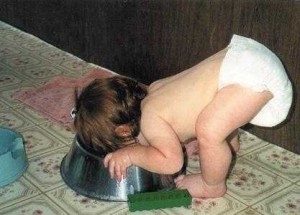 Not Little E.  My floors are bad, but not THAT BAD.
meal time