Putting the "hood" in neighborhood

October 11, 2011
Sunday night we opened the windows to let the brisk fall air in.

Then I heard it. BANG!  Then a security alarm.  I immediately leapt out of bed and went to our back window.  Nothing there.  I ran to Big E's bathroom and looked out the window.  Again nothing.

Another BANG!  What in the world?  I ran to the front window and peeked out.  Neighbor Yoy's car came flying out of his driveway, driven by someone other than our neighbor.  And so did some guy holding his TV.

Holy crap, our neighbors were being robbed.  I went screaming like a banshee into our bedroom.

We couldn't believe our eyes.  We were living our very own episode of Cops, but this wasn't entertaining.  It was freaking crazy!

The robbers left in two cars and sped off down the street as one of my other neighbors chased them in his car (he's Chief of the city prison system and in my opinion, a total bada**)

Neither baby woke up, thanks to the magic of sound machines.

We spent the morning talking to police and some neighbors.  This sucked.  My poor neighbors.  At least they weren't home.

As I relayed the story to my mom, Big E started saying:

Their door got kicked in.  The door is broken.

Uh-oh, he is listening.  I better not say anything else as I don't want to frighten him, even though I'm scared out of mind.

I had a locksmith come out yesterday and he is going to build a moat and some lasers around our house to keep the Yoys safe.  Not really, but I'd totally be into that.

I'm off to peek out our front window and watch for any sketchiness. 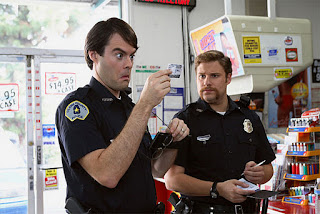 Too bad these weren't the cops.  It would have made the situation much funnier.
crime